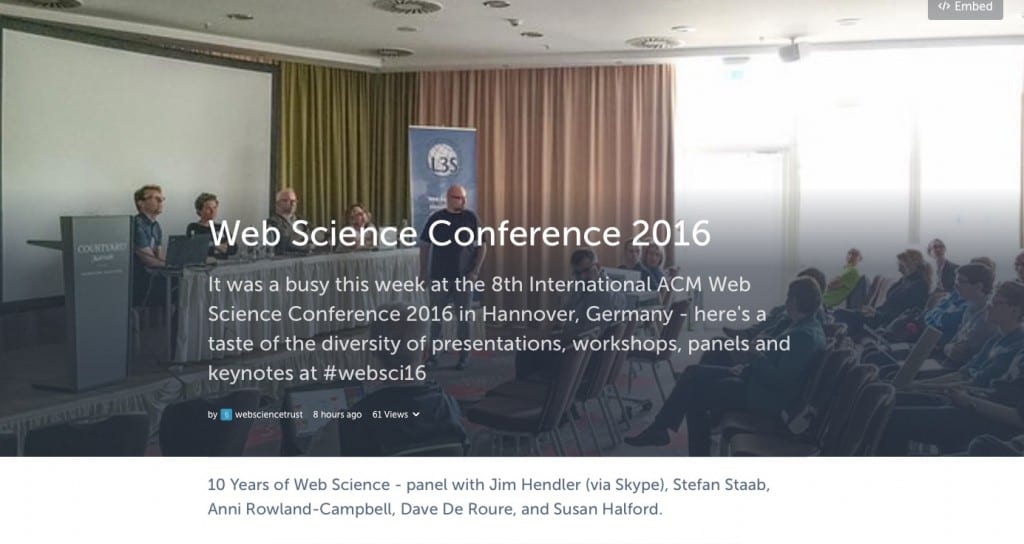 We now live in a world of magic.  One where a handful of very smart people (mostly white males), who now have very deep pockets thanks to their very smartness, are funding other very smart people (mostly white males) to create things which apparently influence events by using mysterious or supernatural forces.  Most of the rest of us don’t understand these forces, we know that they are created by these wizards who sit hunched over computers and mainly live in California, but their language is beyond us, and for much of the past two decades we have been happy with the Faustian bargain made to let them run our world.

This is the science of the magic.

But people are beginning to wake up.

Last week I attended the 8th International Web Science Conference in Hannover which celebrated the tenth year of Web Science, the “theory and practice” of these strange Social Machines of which we are now all a part, and which constitute the magical online world.

The World Wide Web, and the Internet which supports it, have now become so ubiquitous in our everyday lives that the editors of Associated Press decided that the words internet and web should not be capitalised.  These constructs, like electricity and other general purpose technologies, now underpin our modern infrastructure and the magical web of data as a currency seeps throughout most of our everyday activities – try buying something online without registering; try shopping without being asked to join a loyalty programme.  Everyone wants your data and most of us are passively and unthinkingly giving it over.

When I first started working in the digital space in the early 1990’s we all intuitively knew that major change was on the horizon, but few people grasped the enormity of the impacts that digital would have on human society. I remember getting my first internet and email account in 1992 – my biggest challenge was to find other people to connect with. I remember downloading early versions of Netscape, the frustration of sending files via Gopher and ftp, and the challenge of trying to connect my Macintosh computer to anything other than another Apple product.

This is when I discovered Shoshana Zuboff and her first book The Age of the Smart Machine, which investigated the implications of computer mediated work on the people and processes within organizations.  It succinctly described what we were witnessing in the graphic arts industries as we worked with printers to try to help them see that their world was being transformed by data and information technologies, and that the future of print was no longer in manufacturing.

Zuboff’s second book, The Support Economy, explores the shift from the era of mass consumption to the era of the individual underpinned by emerging smart machines that serve to facilitate a new economic model.  These ideas drove much of the thinking that we did at Fuji Xerox in our work on semantic technologies and the attempts to create a personal digital mailbox, even though we were at least a decade ahead of the marketplace.

Zuboff is is now writing her third book, Master or Slave which explores her lifelong themes of:  the historical emergence of psychological individuality, the conditions for human development, the digital revolution, and the evolution of capitalism.  More specifically it explores the emerging forms of networked capitalism – Surveillance Capitalism and Advocacy Capitalism – and their implications for information civilisation.  The former is built on exploiting peoples’ data for economy gain, the latter is designed to protect individuals and that data.  One is out-running and out-smarting the other because the internet and the web are largely ungoverned spaces, often larger than nation states, and they are the final frontier within which huge fortunes can be made with little regulation or interference.  (Zuboff beautifully describes her latest ideas here and here).

These conversations are at the core of the concept of Web Science, and it is always useful to listen to the zeitgeist at conferences that underpins how people see their areas of expertise within the greater whole. Whilst much of WebSci16 was still very focused on the analytics of social media, the side conversations were about the bigger picture challenges of the social web and the ethics of the data, analytics and algorithms that underpin it.  As we discussed the achievements of the past decade, it was evident that whilst much of traditional science is retrospective and studies the past, Web Science from the outset was created to apply the lens of research not to humanity on the Web, but humanity as the Web. Web Science, by definition, needs to be both dynamic and evolutionary and combine the mathematics of computer and information science with the humanity of the social sciences seen through complementary perspectives and shared through a common language.  This dynamism can best be articulated as how the Web is changing the World, and how the World is changing the Web.  It is crucial that we understand where we have come from, but, equally, if not more, important to understand where we are going.

Whilst some may not agree with the metaphor of the Social Machine I have found in the workshops I have facilitated that it serves a useful purpose because it provides a simple model of how people and machines interact.  From this model it is then a simple jump to introduce subjects such as ethics and behavioural change, and to get people to think about their own role within the broader socio-technical system. 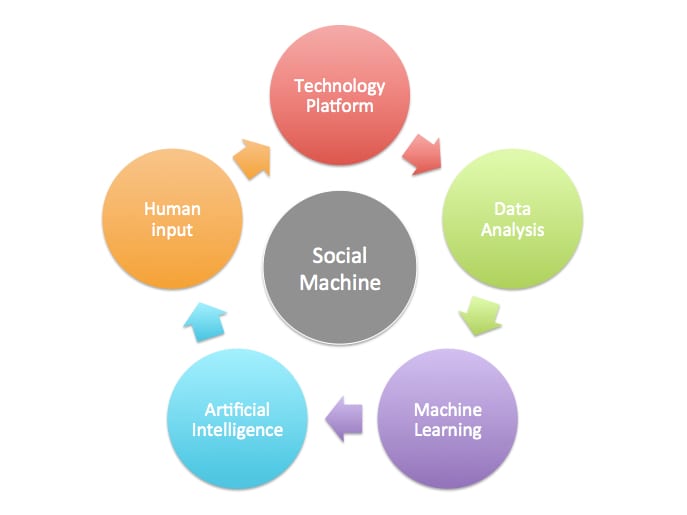 We have only just begun to really think about how to deal with these issues but momentum is building with the work of academics such as Luciano Floridi and initiatives being pushed by the UK and European governments.  The EU has realised that the companies who are dominating are doing so not via products, but via platforms (duh!) and that these, as Douglas Rushkoff has said, are both extractive and exploitive when it comes to respecting the rights of individuals.

Rushkoff goes so far as to warn of major social unrest because of the disconnect between these companies and the broader society, which was perfectly illustrated in an article that came out earlier this year about a San Francisco tech worker who complained that he didn’t want to see homeless riff-raff on the streets when he goes to work.  A further illustration of this can be found in Alexandra Pelosi’s San Francisco 2.0 which describes how the rise of the tech industry has resulted in increasing housing prices beyond the affordability of long term residents and emerging homogeneous communities of tech-bros.  During the time I spent in San Francisco a couple of weeks ago I certainly sensed that same disconnection, with very little interest in discussing the digital world from an ethical or moral perspective.  The drive for capital gain still dominates and even organisations such as the World Bank are investing.

This is very much Zuboff’s Surveillance Capitalism which leaves the little people behind, but whilst this gap between rich and poor is increasing (especially for those who have managed to chain themselves to the Google or Facebook Bus) this is only just the beginning. Once the Internet of Things, Artificial Intelligence and Robotics merge in the next technological wave the impact on human jobs could be enormous. People such as Jeremy Rifkin and Martin Ford (see also March of the Machines) are calling for debates on new ways to distribute wealth.  Some, even those who promote the notion of cognitive capitalism, are proposing a Universal Basic Income (UBI) which both Milton Keynes and Frederick Hayek foresaw.

Alternative proposals around the UBI vary with models being proposed by The RSA, the Liberal Party in Canada and the Swiss vote in a Referendum on 5th June, and polls show quite a lot of support in principle in both Europe and the UK.  The concept of paying people to just live is a contentious one, and it could be that whatever is required is only an interim measure as the economic models of the platform economy change.

Once people have a mechanism to utilise the value of their own data (a personal data repository of some kind) and advertising companies realise that their current model is outdated and ineffective in gaining attention, the platform companies will no doubt turn on payment systems and actually have to sell things. In other words instead of all the money going from advertising to the companies with the people as products, the money will flow in a circle from people to companies to pay for services, and from companies to people to pay for data.  Advertising will have to reinvent itself and a lot of companies who rely on the freemium model will vanish.  This could be wishful thinking on my part but it is a logical next step and one that I am sure is already in the pipeline – Google already has Contributor ready and waiting.  The killer app for this will be personal assistants or bots who act on behalf of an individual, and negotiate via some sort of blockchain interaction to enable transactions between untrusted parties.  Personally I cannot wait!

All of this illustrates the fact that the online world is still in its infancy, and that there are inherent conflicts between Zuboff’s two dominant economic models. The fathers and mothers of the internet and the Web invented them to be open and free as a collaborative Bazaar within which information could be shared and reused for the benefit of all.  In creating this space some humans have weaved their science of magic to create addictive experiences which draw us in, and ensure that we are as much a part of the machine as the algorithms themselves.  Those who have succeeded by exploiting the surveillance nature of this data capitalism have become wealthy beyond their wildest dreams, and some are realising that it is time to give back.

This is where the art of the magic comes in.

Building the technical side of the Web has been an enormous task of co-creation between those who have written the code, and those who actively contribute their data, whether it be through search, social media, or whatever their role in the Social Machine.  Now the social side needs to come to the fore through the education of humans about how these systems work, what choices they have in terms of their interactions, and how they can be more proactive about their living in the digital world.  Some of this links with digital literacy (about which I have written previously), some links with understanding data as a currency, and some will require leadership to take on some of the more thorny social challenges.

This is where Web Science has its opportunity to provide a different and more holistic and integrated perspective.  One which can bring a diversity of communities together and thrash out some of the issues which now face us.  We do not have all of the answers, but that is not the point.

The most important thing now is to challenge, to question and to learn, and not just follow along blindly because it is the path of least resistance.

Being Human in the Digital Age
Living in interesting times