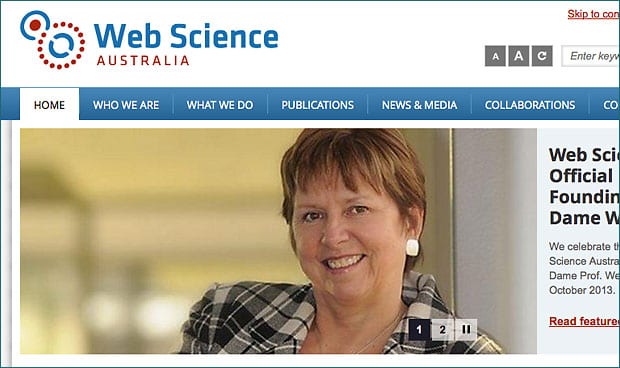 Web Science Australia is delighted to announce that Professor Dame Wendy Hall, Professor of Computer Science and Dean of the Faculty of Physical and Applied Sciences at the University of Southampton in the UK, will be visiting Australia over the next few weeks to attend the 2013 International Semantic Web Conference in Sydney.

Wendy has been described as “one of the most influential women in UK IT” and a good overview of Wendy’s career, and Web Science, can be gleaned from both this video explaining Web Science, and, more recently, a BBC radio interview with Jim Al Khalili.

I first met Wendy at the Web Science Summer School in Leiden last year, and found her down-to-earth and practical approach to the development of Web Science both refreshing and inspirational. Whilst I enjoyed the integrative approach of both the Summer School and the recent Web Science Conference in Paris, I believe that the real value of Web Science lies in bringing together the research insights of the academic world with the practice of solving everyday challenges in the immediate term.

To this end Web Science Australia has been working with a number of organisations to create a schedule of events where Wendy will talk about Web Science and some of the current recent initiatives such as the SOCIAM project.

Most of these events are open to the public and if you are interested please do come along.

In addition, for those interested in finding out more about Web Science itself the University of Southampton is about to hold it’s first MOOC on Web Science which begins in November. If you’re interested you can register here.

Our first Rowland Scholar – Dr Lionel Nizigama
The science of mind, and spirit