In October of 2012 the Institute of Metadata Management formally changed its name to “Web Science Australia”.  As a part of our “soft launch”, which is gradually happening throughout 2013, and will culminate in the 12th International Semantic Web Conference in Sydney in October, I thought I would expand a little upon the emerging discipline of Web Science, and its accompanying phenomenon, the “social machine”.

I wrote about Web Science in an earlier post after I had attended the Summer School in Leiden, and, since then I have had numerous conversations with some key Web Science people, most notably Professor Dame Wendy Hall and Dr Leslie Carr of the University of Southampton. In addition, I have written a White Paper for Web Science Australia which you can find here.

The discipline of “Web Science” was formally launched in 2006 with a view to “understanding the scientific, technical and social challenges underlying the growth of the web.” Following on from this the Web Science Trust was formed in 2009 as a vehicle to promote the discipline, and there is now a network of some 15 Web Science laboratories, a growing community, and projects such as the Web Observatory.

One of the founders of the discipline, Professor Nigel Shadbolt, stated that the term “science” was chosen quite deliberately to mean

“‘the quest to build an organised body of knowledge’ where the Web itself, as a complex network of interactions, as much a social as an engineering construct, is the focus of research.”

Shadbolt expanded by referring to the areas of research focus which would include:

The goal of Web Science is an ambitious one, and seeks to draw on all research from relevant disciplines which, given the breadth and scope of the Web, really means all socio-technical knowledge. At the 2012 Web Science Conference it was clearly stated that:

Accordingly, Web Science involves analysis and design of Web architecture and applications, as well as studies of the people, organizations, and policies that shape and are shaped by the Web.

This illustration by Nigel Shadbolt gives probably the best description of the components of Web Science as a an inter-disciplinary, and genuinely integrating, research field. 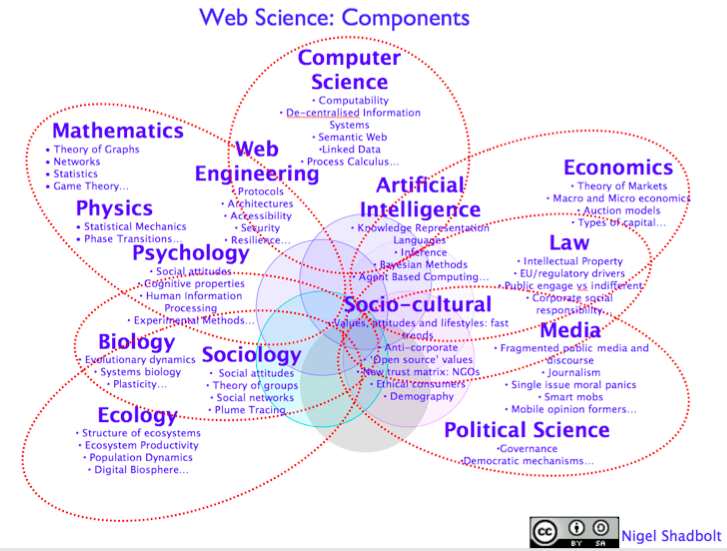 The need for “Open” Data

These aspirations of understanding human behaviour rely on the ability to analyse the activities and information captured as people interact with systems and each other through the Web. Therefore Web Science is intimately connected with the push for “open data”, being “data freely available for people to use and republish without restrictions from copyright, patents or other mechanisms of control.”

Originally the “open data” movement was created, and found support, through the loss of trust in institutions, both public and private, and the call for greater accountability and transparency around the world. As a complement to this more people are participating and collaborating, increasingly made possible by Web 2.0 technologies, which means that there is more data to be collected and more information being shared.

The rise of the Social Machine

In 2007 Michael Wesch, Associate Professor of Cultural Anthropology at Kansas State University, posted a video on YouTube entitled “The Machine is Us/ing Us”.  I recall that, as researchers into the emerging Web, we got very excited by Wesch’s video because it illustrated something that we intuitively knew was happening all around us, and he did it in a way that made sense and was easy to explain to others. Wesch described the context within which a new form of socio-technical system, the “social machine” (first conceived by Tim Berners-Lee in “Weaving the Web”) is evolving. This is where the concept of “read/write” combined with the power of big data and powerful analytics makes the Web an entirely different form of information system to anything previously known.

Many of the current interactive Web applications are very early social machines, however the major challenge is that they are largely isolated from each other and operate as data silos. The more people use “social machines” the more benefits they reap from them; the more applications they find for them, and, as these machine evolve, the more urgent is the need to reflect key interlinked social processes on the Web.

Some examples of social machines are:

None of this is simple, and the goals and aspirations of Web Science are probably amongst the most ambitious and potentially far-reaching of any scientific discipline, but, thankfully, it is attracting some of the best minds around – witness the great line-up of speakers at this year’s conference including Cory Doctorow and Vint Cerf.

Web Science Australia aims to integrate work being done in Australia with that being done internationally, and to connect Australian researchers and practitioner with global thought leaders. We have four key objectives:

What is exciting about Web Science is the potential it holds to truly integrate human knowledge and to at least provide the opportunity to more deeply understanding how our socio-technical systems work. From there we also have a choice in terms of determining what sort of future we want leveraging and utilising those systems, rather than them exploiting us.

The challenge of twenty first century learning? Seeing the hidden connections
Leadership is not a commodity