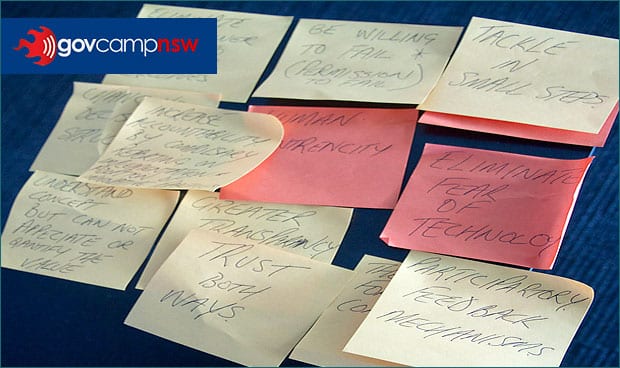 This month is one of events, mainly in the government and information space, beginning with the OAIC conference last week, followed by GovCampNSW, and next week the Web 3.0 and Government conference.

The theme throughout is information, technology and society, the bringing together of people, knowledge and networks within a connected framework to, it is hoped, create a better world.

The OAIC conference was to celebrate the first birthday of Australia’s Office of the Information Commissioner, and brought together a diverse range of people from numerous Commonwealth Authorities including the Freedom of Information and Privacy Commissioners, and the Minister for Hon Brendan O’Connor, Minister for Privacy and Freedom of Information.  What was explored was the interplay between all of the issues underpinning the concept of “open” government, one of which related to the need for skills and capabilities in record keeping, archiving and librarianship, something which at the heart of the IMM’s charter.

This theme of developing the right capabilities for the digital age is one that I am hearing repeatedly, and it connects with that of the contradiction between the need to develop specialities and expertise in certain areas as opposed to the growing “cult of the amateur”.

This latter theme is the title of a book by Andrew Keen, based on a phrase coined in 2005 by Nicholas Carr where he states that “promoters of Web 2.0 venerate the amateur and distrust the professional”.  Fundamentally, according to Carr,

“the Internet is changing the economics of creative work – or, to put it more broadly, the economics of culture – and it’s doing it in a way that may well restrict rather than expand our choices.”  (See Carr’s “Amorality of Web 2.0“).

As a complement to this Keen explores the changing dynamics of content creation in a Web 2.0 enabled digital world.  He articulates what he feels are the deleterious effects of social media in particular on the integrity and professionalism of many professions stating that

“In a world in which audience and author are increasingly indistinguishable, and where authenticity is almost impossible to verify, the idea of original authorship and intellectual property has been seriously compromised.”

Keen very clearly delineates the role of author and audience, something which echoes our work in the Creator to Consumer project, but what he does, as he raises the question of authenticity, is to also bring forth that of trust.  In a world where any “document”, be it written, sung, or photographed, can be appended, altered and skewed without independent and, in theory impartial, editorial judgement, where does one place ones trust and belief in what is real and genuine? And given the power of information, a phrase used in particular by the UK government in 2009 to guide its efforts towards more “open” government, what do we actually mean by the word “trust”?

One useful definition is that articulated by David Straker based on the following:

All of these characteristics are ones which we would hope that our governments can fulfil as we place our information in their care, which is why this question of trust is central to the open government mantra, and to the world of greater information transparency promised by digital information technologies.  As we publish more and more data and information how do we know who and what to trust, and for governments in particular this is crucial.

In his opening address at the OAIC Conference Minister Brendan O’Connor stated that:

Thus information is at the centre, and is where the true value now lies, but what is vital is the value of that information, which depends on its accuracy and, as Genevieve Bell states, the story it tells.

And so back to the events themselves and my own observations.

The OAIC conference surprised me by the level of ignorance in the room around web technologies in particular, and I always have to remind myself that this is probably where most people are at.  This observation was echoed at GovCampNSW which had a more techno-savvy audience, and one specifically framed around the Gov 2.0 conversation.  Overall, it would seem, that despite the observations of some commentators that “social media is now normal“, there is still a very long way to go with the adoption of the tools and technologies, let alone the development of accompanying business processes and organisational mindsets.   Andrea DiMaio, Gartner’s e-Government observer, asks whether Gov 2.0 is heading towards the “trough of disillusionment”, which Dominic Campbell also alluded to in his presentation.  However, Campbell brought forward a glimmer of reality when he stressed the need to always ensure a business case when developing new solutions, rather than just leverage the political rhetoric and electoral spin – when it comes to Gov 2.0 the proof of the pudding needs to be in the eating.

As testimony to this GovCampNSW facilitators John Wells and Allison Hornery held a series of Web 2.0 workshops prior to the event in order to educate people about Web 2.0 technologies, and as part of this they called for volunteers to help record the event with tweets, photos and whatever.  I couldn’t help think about Keen’s words about authorship, combined with the comment made at the OAIC Conference that we are now creating more data than we can actually store (there is a wonderful infographic of this here).  Therefore the challenge for all information managers, including those responsible for the outcome of GovCampNSW, is as much about what to discard as to what to keep and how to keep it – yet another reference to the skills required for records management.

With so many people creating content how do we decide? And with so much of the Twitterstream disappearing almost immediately after the event, what should we make a conscious effort to go out to retrieve?  What is of real relevance and importance to those who will refer to this information, and what is not?

Being a lifelong researcher and current PhD student with years of investment in developing my own expertise Keen’s words ring true for me.  I both abhor the deluge of everyday drivel that is continually around me, and as this increases I  increasingly admire those who write and present well, who do earn a living from their craft and who manage to be heard amidst the cacophony.

As I reflect upon my own presentation for Gov 3.0 next week I have been thinking about how new all of this is, how raw and unformed, how naive and hopeful.

I would not want this enthusiasm for a new era of better governance to dissipate under a cloud of disappointment or into the trough of disillusionment because I do fundamentally believe that the world is changing, that, as Mike Walsh suggests in his “Divergence” presentations, the internet is still in its adolescent phase.

So what we need to recognize is that within this brave new digital world we are all amateurs, and we are all experimenting.  We bring to the collective our combined ideas and insights, our learnings from both failure and success, all of which are equally valuable.

And we must learn to listen, so that as with all times of great change, the small thin voice of reason and common sense is not trampled on and drowned out by those who think they have all the answers.  At this stage nobody does.