There have been numerous themes I have considered exploring this week but the one that has fully matured in my thinking is that of transparency, and here is why.

The big social media news story has been Facebook’s “revamp” with both Timeline and Open Graph.  Some people described Timeline in particular as being a little ‘scary’, others felt that perhaps it was time to leave.  In Europe, where data privacy laws enable an individual to request Facebook to send them the data it has on them (on a disc) Facebook has received so many requests that it has had to email users saying that it could take up to 40 days to deal with the backlog due to the sheer volume.

So, people have been happily sharing their lives in all their glory for the past few years and now that the ante has been upped they are perhaps have a rethink.  The reality is, of course, the stickiness of Facebook, the fact that so many people have been uploading their photos, connecting with their long lost, recently found, “bff’s”, that they could hardly think of letting it go.

This was made very obvious to me when I was chatting with some of the parents at my daughter’s valedictory celebrations and everyone was talking about putting their photos up on Facebook and connecting.  For me this posed something of a challenge.  Despite the fact that I monitor the evolution of social technologies I only participate to a limited degree, precisely because I don’t want my life splattered all over the ether.  I carefully “lurk” in a number of spaces as a sort of digital sociologist to see how people act, to investigate the group behaviour, and to sometimes wonder at the things that people share.

However, I try to be very careful about what I share myself.  On LinkedIn I am less cautious (at the minute) because I think the risk is less, most of my public profile is available anyhow, but I don’t particularly want people seeing my children’s lives in living colour when I don’t even know them and so I try to partition the differing parts of my life.  Enter Google+ and the new Facebook of course!  Even on LinkedIn I get requests to join from people I’ve either hardly or never met which I don’t accept – it takes more than a casual conversation or the coincidence of working in the same organisation to qualify in my books.

The other interesting one is Yammer.  Deloitte Australia was recently awarded The Forrester Groundswell Award for Employee Collaboration, using Yammer.

Deloitte’s CEO Giam Swiegers, in an interview, stated that

“social media and digital communications is going to be vital … if you don’t get social media you are most unlikely to be an effective leader going forward.”

Peter Williams, CEO of Deloitte Digital, spoke at our recent IMM Meta 2011 conference and during one of the breaks was having a lively conversation with a number of other speakers about Yammer and how effective it had been within Deloitte.

My own experience at Fuji Xerox Australia is that for those who participate then there can be a great deal of value, but all too often there is the same relatively small group of people who contribute, a lot who mostly “lurk”, and those who sign up but rarely bother.  Then there are those who think, rather naively, that whatever they post on a “corporate” Yammer site is somehow secure, when all it takes is a quick download or screenshot and it can be out into cyberspace in a nano-second.  And these people are not necessarily the newbies or the digital dinosaurs, it is often those who should know better.

Rob Howard in a recent post asks “Are you lost in the social universe?” and gives an easy to understand and, I think, useful description of what he sees as the different communities that exist. 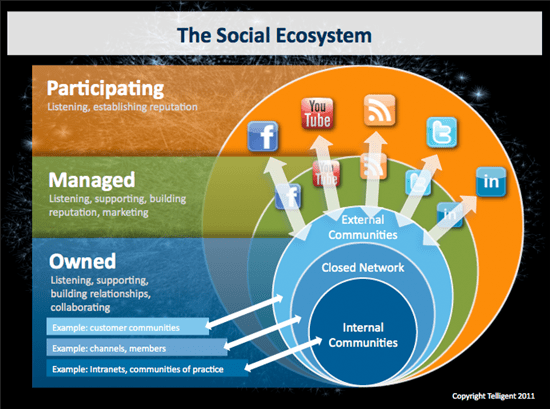 In the digital world all of these are, in theory, interchangeable in terms of the content that can be copied, distributed and shared.  Even files and comments on proprietary platforms can be easily taken, as the US Military found to their horror thanks to Bradley Manning and Wikileaks.

So, we have the tools to create an increasingly transparent society, and there is a generation that seems keen to share.  But, it’s neither the technology nor the exuberance that will eventually dictate where all of this goes, it is how we as humans socialise these technologies and learn to deal with them.

I have raised this issue before in my previous “Analogue/Digital” post, but the more I observe how people are behaving the more I think we need to integrate an analogue/digital education into our everyday life.

Andrew O’Keeffe’s Hardwired Humans” is an easy to read and practical book which looks at humans from the “instincts” level, why we do what we do and how this manifests in the way we live and work.  For me it has brought back many of the lessons I learned at the Tavistock Institute’s Leicester Conference, once described to me as the “SAS training in psychology”.  At Tavistock we were placed in a human zoo for two weeks with minimal content, maximum stress, and a mixture of people from all walks of life (most sane, some questionable).  Without exception all who participated left with a very different view on life to that with which they came.

There was a wonderful doctor I met there who said

“I know who I am. What I want to find out is what I can become.”

So, what are we to become and how are digital technologies influencing that on a personal, group, organisational/tribal and societal scale?  This will be the topic of my next blog as I begin to journey into the areas of digital anthropology and sociology, and from there to the digital brand and my PhD thesis which is now finally taking shape.

Observations from FutureGov 2011
Evolution of the digital brand