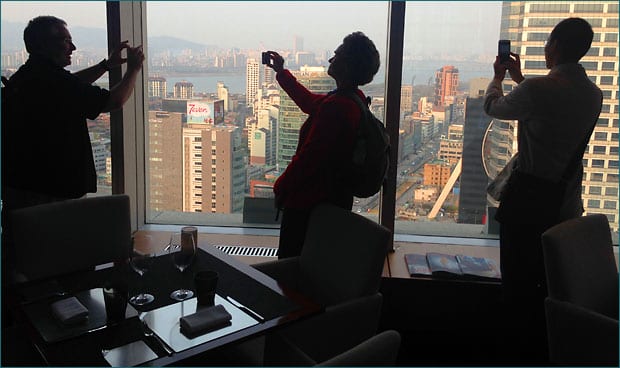 This photograph says it all really! Three people, armed with smartphones, on the top of a skyscraper overlooking a polluted city.

It was taken on the top floor of the Seoul CODEX Intercontinental Hotel just prior to having the most expensive gin and tonic in history (at least for us!). We were attending the 23rd World Wide Web Conference, which I followed up with a week in Kyoto, Japan. As we snapped our photos (to be published via Twitter or Instagram or whatever) we brought the physical and digital worlds together, and laid one more block in the foundations of the ubiquity of the World Wide Web.

The week began with the “Sociam” workshop and presentations by Social Machine researchers on everything from “telling stories” on the Web, to personal data stores, humans as API’s, the “Omega Machine”, and the development of the Web Observatory.

The research being undertaken in this space is attempting to bring together the social and technical sciences, in order to more fully understand how the Web, as a “socio-technical” system, is impacting society and how people, technology and information are collaborating to create new forms of “intelligence”.

As I watched the presentations I had the same feeling I so often have: that researchers – and particularly those from the technical and computer sciences – are active in a fertile field for research, but that they talk about “users”, “people” and “community” from an almost disconnected perspective without really “feeling” what they are talking about.

There are a number of experiences I have had over the past two months that make me feel that the “digital divide” is as wide as ever, particularly in how technical people interpret and understand the needs and mindsets of the everyday “citizen”, and how everyday people interact with and interpret the world of “data” in digital form.

One was a conversation over lunch where I had a diverse group of people – an artist, landscape architect, publisher, management consultant, and carpenter. The conversation inevitably touched upon the digital world, as it always seems to (particularly if people ask me what I do) and we then had quite a robust conversation which flushed out differing perspectives on the encroachment of digital systems and the potential loss of the benefits of information in analogue form. Many people still like writing with pen and paper; my son has now discovered “vinyl” and is steadily building his “record collection”; and we still take the real, furry dog for a walk along the beach. Whilst “digital” is becoming more pervasive we are still physical creatures.

The second was the reaction I had as I experienced the socio-technical aspects of both Korea and Japan, particularly with the pervasiveness of gadgets, and connected devices.

I felt that life in Seoul – a “concrete jungle” in which I felt both alienated and claustrophobic – was one that could very easily become “soul-less”. This was reinforced when we spent some time in a Korean Spa. There we had a number of conversations with local residents who spent hours in the Spas, brought their children, and told us that one of the main reasons they went was to reconnect with “the elements – water, salt, dirt”, because this was so lacking in their day to day lives.

In Japan, where even the “beer pouring” is automated (see photo below), I found it fascinating that I was approached by a number of older citizens asking to act as my personal tour guide because they were doing whatever they could to “keep the dementia away”. They were part of a government programme which seeks to keep elderly minds active after retirement, which I thought was a marvellous idea, but also so incongruous with so many other aspects of Japanese life. 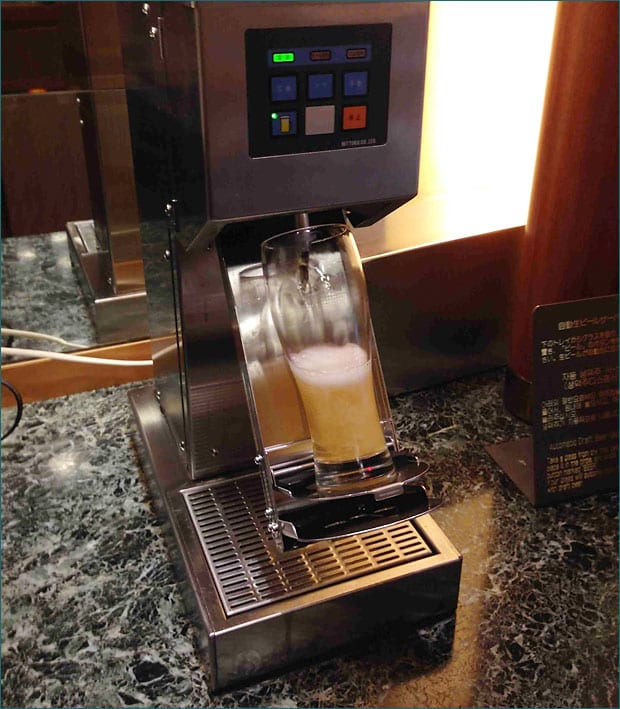 Some of the presentations at the Sociam workshop caused me to reflect on the concept of “technological determinism”, and the rise of more and more “wicked problems”, particularly in government and how it interacts with citizens.

“Wicked problems” are those which are “ill-formulated, where the information is confusing, where there are many clients and decision makers with conflicting values, and where the ramifications in the whole system are thoroughly confusing” (originally defined by Professor Horst Rittel of the University of California Architecture Department).

Nowhere is this more prevalent than how we humans interact with the information systems around us. The Web, as it matures and becomes even more embedded in our daily lives, offers both a window on to human nature as we go about our daily lives, as well as a challenge as it changes how we interact and is itself determining aspects of the future of humanity.

It has taken me a while to process my trip, which I found fascinating in so many ways, and it has caused me to revisit some of the science fiction I read when I was younger.

On the top of my list are the stories of Isaac Azimov, both the “Robot” series, which is uncanny in its predictions of how the world of information is changing human society, and “The Foundation”, which postulates a world in which “social complexity” can be computed and the course of human history both predicted but also manipulated through science.

For anyone interested, I would strongly suggest some time with Azimov mixed with some time to just observe the world around.