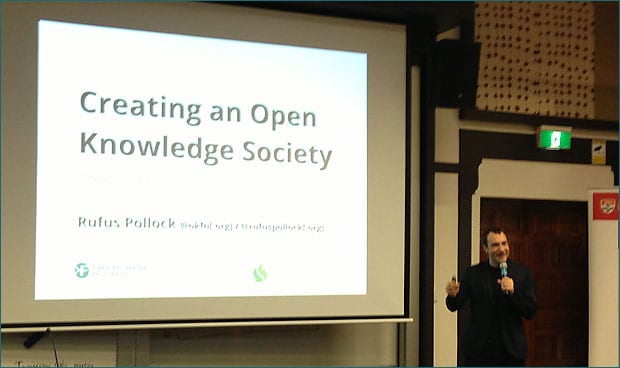 On Monday evening I went to a talk given by Rufus Pollock of the Open Knowledge Foundation (OKF) at the University of Sydney.

Pollock had, quite literally, just got off the plane for a whistle-stop “down-under tour” of Australia, and he did well to respond to questions and give an overview of the OKF to what seemed like a largely academic audience.

Pollock’s self-description is as follows: Dr. Rufus Pollock is a Founder and Director of the Open Knowledge Foundation, a Shuttleworth Foundation Fellow and an adviser on open data to several governments. He has worked extensively as a scholar, coder and activist on the social, legal and technological issues related to the creation and sharing of knowledge.

He’s done well in helping to create the OKF which is now recognised as a leading organisation working in the “open data” and “open access” space with numerous active projects and working groups organizing activities around the world.

Pollock began by stating that “it’s natural to be open and to share”, and from there he expanded upon the values of “openness” and the benefits of sharing, particularly in a digitally enabled information world.

This whole movement to being “open” is one that has received a lot of attention over the past decade, and the rhetoric around “open” is one that is now I think is beginning to tire, which is a shame, because the values underpinning it are sound, as are the objectives of those who have worked so hard to achieve what has eventuated thus far. Unfortunately, genuine “movements” all too often get hijacked by political expediency, and with that they lose both their credibility, and their ability to continue to garner support.

As an example, in May of this year the Australian government stated that it was joining the “Global Open Government Partnership”, which is just the latest statement in this space. I seem to have heard so many of these types of announcements ever since we went through the whole “Open Government Declaration” in 2010.

All good stuff. But, as I listened to Pollock I thought about the relationship between information, knowledge and power.

If “knowledge is power” – which is a whole debate in itself – is it natural to share power as well? And, power over what, whom and how?

The Conversation this morning posted an article talking about the “elephant in the room” in the current Australian election debate:

“Privacy matters to people. And yet, judging by the latest policy statements, it does not matter very much to the big parties. There is an elephant in the ballroom but they’re going to ignore it and instead make noises about trust, borders and broadband.”

As an issue that underpins pretty much everything in terms of information sharing, power and knowledge, the interaction between privacy and “openness” is largely being ignored in mainstream discussion. It is, however, beginning to be taken seriously by many people, and in a new report Pew Internet Research found that “many teen apps users have taken steps to uninstall or avoid apps over concern about their privacy” and, when they need to, they will seek advice from friends and family.

Hallelujah! At last it seems that some common sense is beginning to emerge!

If teenagers are becoming more savvy about sharing information then we should not be surprised that Corporations and Governments are themselves both nervous and hesitant – always have been, always will be. In the case of Corporations the sharing of information is something that needs to be determined as much by shareholders as by regulation; in the case of Government, by the needs to protect and secure, as much as by those of transparency and accountability. In all cases it is a delicate and complicated balance.

The other thing to consider is the politics of “open” in a world of information abundance.

Where there is a plethora, and indeed an overwhelm, of information, it is not the information that has the value, but the ability to find the right piece at the right time for the right purpose. Pollock likened the concept of “open search” to that of a “general purpose technology” (as in one that can affect an entire economy, such as electricity) where it should be available to all. Unfortunately I don’t think history is on his side as we’ve seen with the increase of privatisation and corporatisation of public utilities, and, despite the veneer of altruism, I doubt that Mark Zuckerberg’s latest initiative “www.internet.org”, has much in the way of public good at its core. As Caleb Garling said in a recent article

“You’d be hard-pressed to find many who believe that Internet.org is anything but a Trojan horse for some big tech companies to access new customers. We get how this works: First World firms go into Third World nations under the banner of humanitarianism when the real point is to get their products to new sources of revenue. Been happening for years.”  (Caleb Garling)

In terms of “sharing” we should also begin to think about the emerging challenges that will accompany the so-called “weightless economy”, where the distinction between “products shared as physical things” versus “products shared as digital descriptions of physical things” will become increasingly complex, and will impact upon all aspects of intellectual and property rights.

As Chris Anderson says in “Makers.  The New Industrial Revolution”

and this is largely because hardware is becoming much more like software. In this new “digital economy” the trade is in intangible information, services, and intellectual property, where

products have the potential to become little more than “intellectual property embodied in commodity materials”.

Pollock did refer to 3D printing, but there was no mention of this emerging conundrum, nor of complexity that will eventually accompany it, and, for a debate around “Open Knowledge Society”. I found this disappointing.

Wikipedia defines such as society as being “a non profit community working for the dissemination of all forms of Open Access to Knowledge”, and the OKF believes that “a vibrant open knowledge commons will empower citizens and enable fair and sustainable societies”.

Such goals have driven many political movements and innovations over the ages, and arguably things have progressed a long way in many parts of the world over the last century. But there is still a long way to go, and, regardless of the smartness of “intelligent” systems and clever algorithms at the heart of it all is the need for the wisdom to determine what should, and shouldn’t be shared, based on both time, place and circumstance.

For those working in organisations seeking to facilitate more openness and sharing for the good of all there is the constant juggle of everyday requirements in terms of both governance and technology. These brave soldiers are daily faced with the challenges of managing information and it is the politics and policy that takes up the resources, not just the technologies. The rhetoric and promise has not resulted in much real change on the ground, nor has it resulted in vastly different ways of doing things to service the average customer or citizen, apart from “smart transport apps” and things relating to GPS data.  The real change will come when data is truly interoperable and we approach it in a much more “humanistic” way, as Genevieve Bell has suggested (see previous post) where

“what if we think of data as if it were a person”.

This will always engender debate, and I thank Rufus Pollock and the organisers of this event for giving me the stimulus to write this piece and put my own thinking cap on.