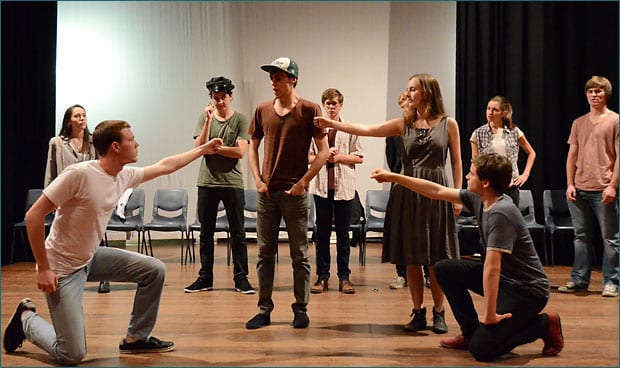 Today was the first rehearsal of the Intersticia Foundation’s first live theatre production – The Laramie Project – at the Zenith Theatre, Chatswood. Click here to visit the website.

The Laramie Project is “a verbatim, documentary style play” constructed from the precise words spoken by people interviewed about the brutal beating of Matthew Shepard, a 21-year-old gay university student, who was tied to a fence and left to die on the outskirts of Laramie, Wyoming in October 1998.

In November 1998, Moisés Kaufman and the members of Tectonic Theatre Project travelled to Laramie in the wake of this devastating crime and conducted hundreds of interviews with the people of the town.

In February 2000 The Laramie Project opened in Denver, Colorado, and the play has gone on to be performed in theatres, universities and high schools around the world and is currently an Australian HSC Drama text, studied by hundreds of students.

In October 2009, 11 years after Matthew’s death, President Barack Obama commemorated the enactment of The Matthew Shepard & James Byrd, Jr. Hate Crimes Prevention Act, and in his speech he said:

“At root, this isn’t just about our laws; this is about who we are as a people. This is about whether we value one another – whether we embrace our differences, rather than allowing them to become a source of animus.

“It’s hard for any of us to imagine the mind-set of someone who would kidnap a young man and beat him to within an inch of his life, tie him to a fence, and leave him for dead…

“But we sense where such cruelty begins: the moment we fail to see in another our common humanity – the very moment when we fail to recognize in a person the same fears and hopes, the same passions and imperfections, the same dreams that we all share.”

In March 2012 a group of remarkably brave and free-thinking school students came together to tell the story of Laramie as their Year 11 production and, not only was it an acclaimed success, but it proved to be a life-changing experience for them all.

The play was, for all of them, a lesson in the enduring power of theatre to change perspectives and ask questions of us, not just as audience members, but as people. The director and cast were struck by the way in which this play brings together so many achingly human stories to form one truth.

Now, in November 2013, this same group of students has come together in a return of their production of The Laramie Project speaking to a broader audience, and, for many, enjoying their first experience on a professional stage. The willingness of these recent high school graduates to throw themselves into this project, only days after completing their HSC exams, is further testament to the strength of this remarkable play and its capacity to inspire. The importance of compassion and our boundless capacity for love and understanding are hallmarks of this remarkable play.

“We have been charged with doing our best to tell the story correctly, and it is a big responsibility. There is something very powerful about witnessing such young actors telling this complex story with such wisdom and clarity.” – Ravenna Gregory, Director.

There were only four performances – Monday 18th, Tuesday 19th, Wednesday 20th and Thursday 21st November 2013, at the Zenith Theatre, Chatswood.

The science of mind, and spirit
Generations of Hope