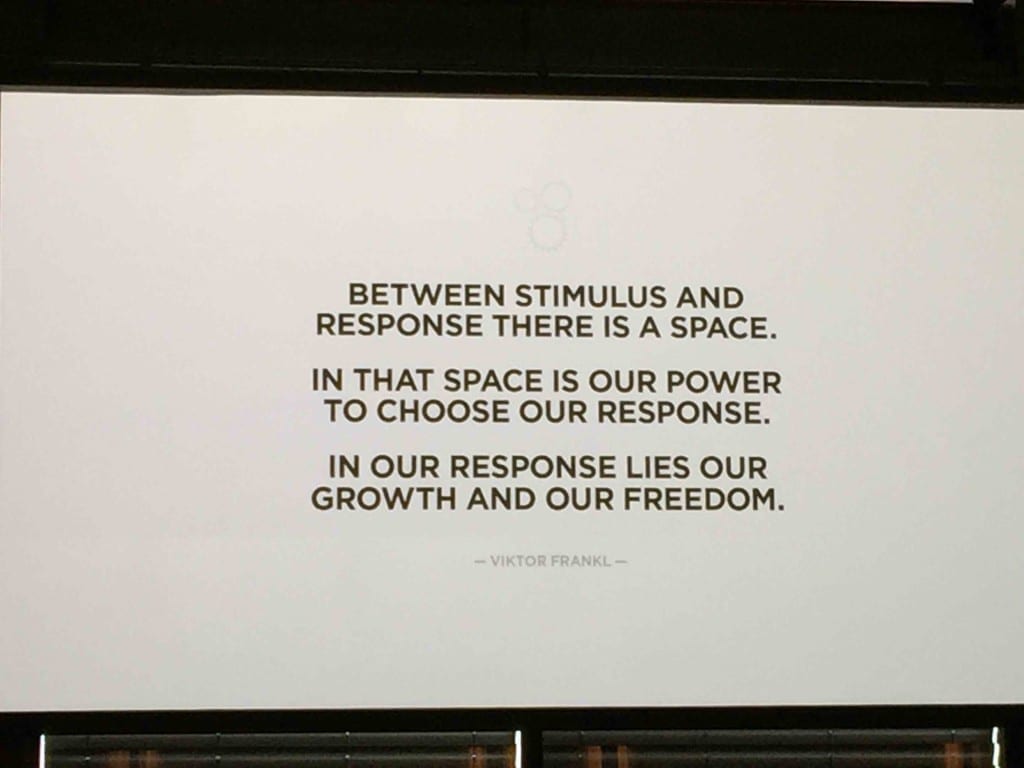 Last week I attended Philanthropy Australia’s 2016 National Conference in Sydney and CEO Sarah Davies opened the conversation with this quote from Victor Frankl.

It resonated for me immediately because it highlighted two important elements of philanthropy.

I have written previously about the leadership role that I believe philanthropy – in its broadest sense – can play in 21st Century society, and Frankls’ words further reinforce this.

Philanthropy Australia’s event was well organised and the PA team are to be congratulated for putting a wide range of important issues on the table, for being prepared to ask some of the difficult and wicked questions, and for managing to bring together such a diverse and well-intentioned group of people.  A thorough critique of the event by Nicole Richards can be found here.

The more of these events I participate in the more it seems to me that we (as in Homo Sapiens) are forgetting, and in many cases, removing ourselves from the fragility of our world.  We are aware that things are changing at break-neck speed, and many of our social problems come from our inability to cope with those changes, but we, and the organisations upon which we rely, are operating on human time, whilst the systems that underpin them do not.  The majority of our human institutions have been designed to solve human problems through human processes – negotiation, bureaucracy, education.  Many, such as the European Union and the United Nations, are deliberately designed to slow things down even more in order to enable considered decision making and minimise potential conflict.

However, our world is now largely driven by science and technology, and these operate on computer time, determined by organisations which seek to maximise profit  and grow as quickly as possible.  They are running faster than our governments, our NGOs, and many of our Not-for-Profits can fathom, and they are now beginning to dictate the human agenda (see Yuval Noah Harari‘s Sapiens and Homo Deus).

There were two major gaps in the PA conference, both of which are now front and centre in discussions around the world, and which are fundamental to any discussion about future readiness.

The first is that of disruption.

A couple of weeks ago I attended a luncheon ostensibly to talk about philanthropy which ended up being a diatribe about acquitting public grants and filling out forms.  At the end I was asked how I found the session and I said, quite simply,

as a philanthropist I just go and do stuff, I don’t spend time and energy filing out forms or expecting those I support to either.  Things are happening too quickly, we need to get on and do things, not just talk about them.

I appreciate the need for larger organisations to have processes in place, but, to me, this just reflects one of the major challenges for all organisations which still operate on nineteenth century industrial age processes driven by the fundamental model of capitalism:

There is a major disruption coming which is already impacting upon every aspect of every business (public, private, philanthropic) and every human life.  This is elephant in the room which is not being faced full on, but it is what will derail us.

Philanthropy, as with all sectors, is being disrupted.  But what does that mean?  What new models are emerging and what resources, skills and organisational processes are required to enable agile, responsive and yet effective philanthropic organisations to lead and take the running when it comes to solving pressing social problems.

The second is that of technological displacement and the Universal Basic Income (UBI).

One of the fast emerging disruptors throughout society is robotics and automation, and articles about the potential for this on jobs are now coming thick and fast.  The UK, US, and many countries in Europe have been debating this for a number of years, but this conversation is sadly lacking in Australia, and yet it is going to be one of the major causes of social upheaval in this century.

The reason that the UBI is of importance is because it is one mechanism that is being touted to moderate the impact of technological displacement, but there are many others, and different nations will pursue different solutions, depending on their histories and cultural value systems.  However, the main question at the heart of this, and of many of the aspects of disruption, is to ask the very simple question

what is the economic value of a human being?

There are many other disruptors which will redefine all sectors of our society, but this is the one that has the potential to create civic unrest and increase inequality in the next decade, and the one that we need to be preparing for in terms of our education, healthcare, and social reforms.

This goes to the essence of philanthropy, because philanthropy, by definition, doesn’t treat humans as economic commodities, but rather is focused on human values such as compassion, empathy and empowerment.

Philanthropy is the only sector of society that is voluntary – we choose how, when, where and to whom, we give our time, resources, knowledge, networks and counsel.  We can withdraw it, we can shape it and we can make it grow in ways that neither government nor the commercial world has any idea about.

We are hugely fortunate in this country in so many ways and the Tyranny of Distance plays out both in our favour and against us.  I think at the minute it is one of our greatest assets.  We can watch what is happening elsewhere in the world and play with ideas; we can stop being reactive and blindly copying what happens elsewhere and start taking stock by proactively creating a new conversation about the role of individuals in civil society, and their relationship with government, business and the community.  More than ever, we can harness the generosity of spirit that is the essence of being Australian, and take philanthropy to a new, much more dynamic and empowering, level.

We are also fortunate to have Philanthropy Australia as our peak body, something that other countries don’t have.

I would like to challenge PA now to build on the work that has been done over the past few years and start having the really challenging and brave conversations that need to be had to ensure that not only is philanthropy future ready, but that it is in a position to proactively shape that future and take on future leadership.

“For thousands of years history was full of technological, economic, social and political upheavals. Yet one thing remained constant:  humanity itself. … However, once technology enables us to reengineer human minds, Homo sapiens will disappear, human history will come to an end and a completely new kind of process will begin.”  (Yuval Noah Harari)

Where do we, as philanthropists, want to be in defining those future processes, and what role do we determine to play?

And now for the really fun part … Ethics and the Web
We’re all being transformed, whether we like it or not …