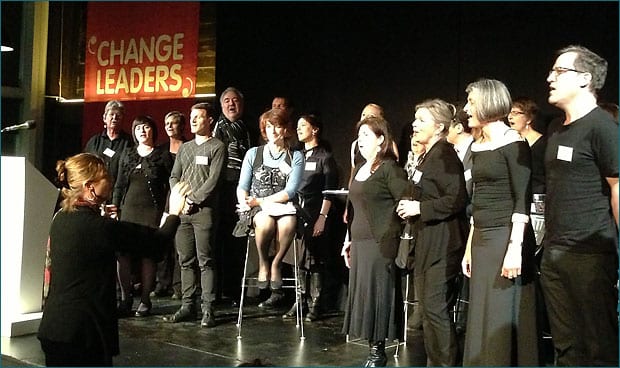 Last week I attended the launch of a new book “The Australian Leadership Paradox:  What it takes to lead in the lucky country” by Geoff Aigner and Liz Skelton.

The launch was jointly hosted by The Benevolent Society and Social Leadership Australia and held at one of my favourite venues, the Wharf on Sydney Harbour. It consisted of an interview with the authors conducted by Geraldine Doogue followed by a wonderful choral closure by Another Roadside Attraction singing “Oh What a World”.

Since then I have been reading the book which highlights a number of specific characteristics of what “leadership” means within the Australian context.  Quite specifically Aigner and Skelton articulate the following in terms of paradoxes:

Perhaps the most important tension that is identified is that between “authority” and “leadership”, which are separate, but interconnected concepts.

Drawing on the work of Harvard’s Ron Heifetz, and his concept of “adaptive leadership”, Aigner and Skelton state that

“the work of leadership is to mobilise people to face their new realities and solve their own problems … in helping systems tackle problems which do not have ready-made answers and will inevitably means some kind of difficulty or loss in the short term”.

As a complement to this

“authority is a role with a clear mandate and expectations to deliver the core functions required for a system’s survival, viz. the functions of direction, protection and order.”

Authority and leadership are complementary bedfellows, and, as I learned at the Tavistock Institute’s Leicester Conference many years ago, just because one has authority doesn’t mean that one is a leader, nor vice versa. Heifetz articulates the difference between “technical” and “adaptive” challenges, where technical challenges are those in which the answers are fairly well understood, whilst adaptive challenges require new solutions.

If Leadership is what one “does” as opposed to who one “is”, then understanding this difference is critical and the need to own, understand and step up to the role of leadership with a clarity of purpose is fundamental to anyone who aspires to lead.

This notion of separating the person (“is”) from the role (“does”) is something about which I have always been acutely aware, particularly as my parents moved up the hierarchy. For military people specific “postings” embody both the responsibilities together with whatever resources (including people and things) accompany and support those positions. These are part and parcel of the role, but they also immediately transfer to the next person when an individual’s term in that role is over. As my father used to say “there’s nothing as ‘ex’ as and ‘ex Ex’”.

I recall a conversation with a friend of mine who used to work for a Federal Member of Parliament. When he started he was taken aside by the Secretary in the local electoral office, who had been there for years, who told him:

““They will wine you and dine you. You will be driven in fancy cars, and be given tickets to opening nights, invited to slap-up dinners, and made to feel very important. But always remember, it is the job and the position they are courting, it is not you”.

What a wonderful piece of advice!

The other major tension that the book explores is that between prosperity and adversity.  As Aigner and Skelton comment

The Economist magazine stated that

“If you look at history, Australia is one of the best managers of adversity the world has seen – and the worst manager of prosperity”.

Our inability to manage prosperity is a major impediment to our current ability to lead, and it is perhaps our immaturity and “adolescence” that underpins this. Deciding on what type of leader we want to be is as much a product of circumstance as it is of our DNA, and by far the greatest lesson I learnt through my involvement in the creation of the GAMAA Leadership Programme was that leadership is contextual in time and place, history, culture, role and responsibility. It is also something that needs to be experienced from both the perspective of those who exercise leadership in roles of authority, together with those who experience others doing so.

One thing that I don’t think was explored sufficiently is the role of “followership”, without which there can be no leaders. We can’t all be leaders, and allowing someone else to lead is a skill in itself. Perhaps one of our greatest challenges here is that despite having a wealth of leadership examples – in government, the military, business and philanthropy – we fail to acknowledge these people and to tell their stories sufficiently to our younger generation.

Aigner and Skelton end their book with a statement that

“We have enough room to do something useful, not just for Australia but further afield. When we begin to share responsibility for our fate and are brave enough to trust ourselves to experiment and fail, we can overcome the biggest hurdle – being brave enough to think we can succeed.”

This refers to both the tyranny of distance, which we have always felt acutely when looking towards Europe and North America as the centre of gravity, but also to the other emerging paradox of the twenty first century, that of the tension between scarcity and abundance.

I will explore this more fully in my next post. Suffice to say that if only the leaders in Australia could stop naval-gazing and playing the game 0f self-indulgence in the name of political pragmatism and put the country before themselves the potential to truly lead might be realised.

Regardless of which side technically wins the Federal election on 7th September, 2013, I only hope that it is the Australian people first and foremost.

Unfortunately I have my doubts.

Learning by Giving
Please Sir, I want some more!