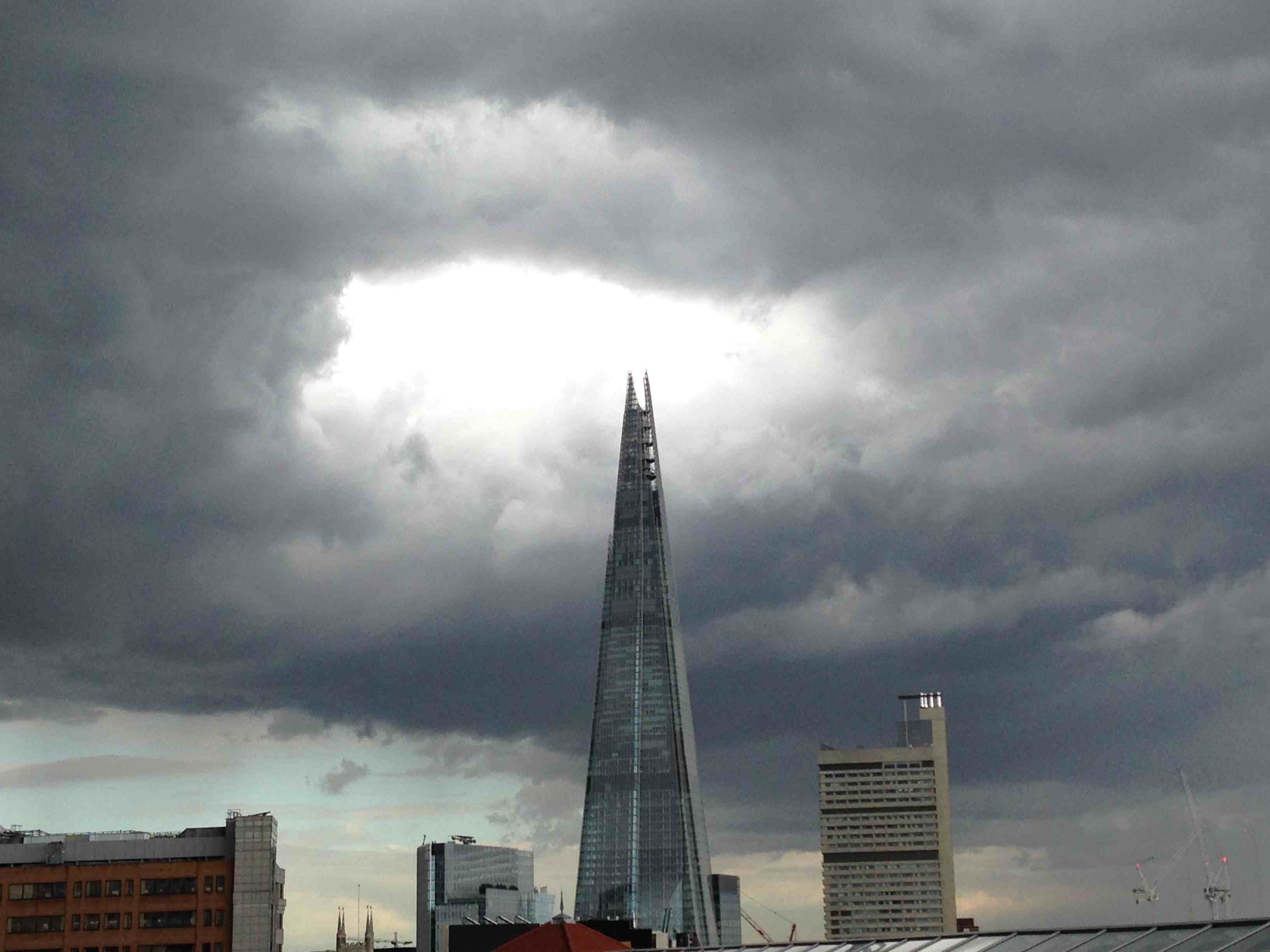 I took this photo of “The Shard” amidst a storm a couple of months ago from the rooftop of the Tate Modern in London.  It struck me that for anyone who discounts the impact of humans on the environment this was a startling demonstration … even the clouds parted for a man-made tower.

As I ponder my own impact on the world (in its broadest sense) and consider the renovations to my house, my commercial investments (impact or otherwise) and my non-profit activities, I have been struggling to find the right words to describe what I do and where I want to put my focus.  Regardless of where I search I am increasingly drawn back to the word “philanthropy” because of its fundamental intent.

In its traditional form “philanthropy” means “love of humanity” (philanthropos tropos) and tends to be understood as the caring, nourishing, developing and enhancing of “what it is to be human”.

In a previous blog I wrote about Socrates’ philanthropy as his “desire to promote the welfare of others” by wandering around talking to the people of Athens and “examining” them as he examines himself.  His goal was “to help individual men and women to become better morally” in order to live “better” lives and serve their communities.

But “man” is just a part of a much bigger, and more complex ecosystem, which is growing increasingly complex as new “intelligences” are added.  To be concerned with the welfare of “man” we must, by definition, focus on that broader system and more effectively understand both how it works, and how it is changing who, and what, we are, and potentially might become.

The whole conversation about man and our environment is an emotional, at times confusing and complex one.  In a recent RSA lecture “Knocking the Corners off the Square Mile” Peter Wynne Rees, Professor of Places and City Planning, outlines some of the challenges of building in historic sites, and of bringing the old and new together.  This same conversation is happening in the technology world, and the concept of “heterotopia” comes to mind.

This year I have travelled to a number of places where I have felt there were “no intelligible connections”.  In cities like Seoul, Osaka and even parts of New York, I often felt that the concept of “human scale” was non-existent, and, as I walked around, I overwhelmed and even disempowered by the grandeur and sheer scale of the buildings.  I was left with no doubt that, as an individual, I really just didn’t matter.  As a contrast when I travel and live in cities such as London, Paris, Sydney and Melbourne, I do feel that I can makes sense of, and be a part of, something which is essentially “human”, and of which I feel both an empathy and a sense of belonging.  I particularly feel this in a city like Canberra which is low-rise and integrated with nature.

As we progress further into the so-called “Anthropocene Era” I believe that exploring and redefining the relationship between “man” and “everything else” is the most profound and demanding question that we face.  And, this is not just about the physical “built environment” but it is as much about the emerging “virtual environment”, and the very essence of human behaviours and how we utilise resources in the digital space as well.

Having spent much of 2014 having numerous and varied conversations around the notion of “social enterprise” and “giving”, I feel that the whole concept of “philanthropy” is undergoing a profound redefinition, and that each and every culture needs to define and articulate what this word means to them.  There is no point in comparing Australians to the Americans or the English or the Chinese – each culture has different histories, different systems of governance, taxation and commerce, and different perspectives on humanity which have evolved over time, and each has a different notion of how “humans” fit within the broader scheme of things.

This links to people, government and digital technologies.  In Australia we whinge and complain that our systems are not as efficient as places like Singapore or, in many ways, China, because they seem to be cumbersome and we have to work hard to initiate processes and activities.  We resisted the Australia Card and each of our States has its own election cycles, laws and identities, and we often feel that there is a disorganised “anarchy” happening around us, which is actually symptomatic of our tendency to rebel and push back.  And, all too often, Australians will resist through sheer apathy (the danger of this of course is that we can also be incredibly ignorant and just let things slide because we couldn’t be bothered or we feel that we have little influence).

But perhaps that is a key part of our charm, and something we should value and even nurture.  Perhaps, when it comes to the “machine” and our determination to remain “human” it is precisely this which will buy us time and give us the opportunity to think, just as the European Union is doing with many aspects of digital technologies.

In a recent interview Wesley Enoch talked about the Queensland Theatre Company’s recent production of “Black Diggers” and the rise of “meritocracy” within Australian society.  Enoch describes the rise of egalitarian values amongst “Aussie Battlers” whose “quiet strength” was evident during World War One, where black and white Australian soldiers fought side by side as equals.  These same values are inherent in our society today, even though many of us feel that they are struggling to be heard as we are swamped by the media-frenzy on terrorism and the “fortress Australia” attitude that our current crop of politicians seem determined to resurrect.

“We live in the legacy of those who have gone before us … we are the inheritors of this incredible lineage.”

This is not just the case for our indigenous Australians, but for all of us who call this land our home, whether our families came here two hundred or two years ago.

I was asked what it is that defines people in Australia, and as I thought about it I came up with the words that people have come here to “seek a better life”.

That “better life” includes our attitudes towards each other, our “philanthropy”, and is something that is uniquely ours.  We should build upon our “incredible lineage”, whilst simultaneously absorbing new ideas that are appropriate, but remaining vigilant about things with which we are uncomfortable or even suspiscious.  We should fight back through our inefficiencies and apathies precisely because these are often driven by a niggling suspiscion that we are uncertain of what lies ahead.  We don’t need to rush, in fact, if ever there was a need to slow down (on many levels) this is it.

In an age where people are increasingly being integrated into the “machines” of our technologies – the “Social Machines” – perhaps it is not a bad thing that Australians would prefer to go to the beach, and that our cumbersome systems of government are at times over-burdened by committees that slow things down and encourage introspection and “paralysis by analysis”.  As I wrote in a previous blog it is most important that people, and not machines, determine who we are – how we are governed, how we relate to each other and how we relate to the world around us – and the more conversations I am having about this at the minute the more important I feel it is.

I do believe that we are on the cusp of making some major decisions about the future of human existence – whether it be what skills and capabilities we develop and potentially lose; what rights we, versus “artificial intelligences”, might or might not have; what determines being “alive” versus being “dead”; or whether or not the “Singularity” is something that will advance and assist humanity or signal its demise.

At the heart of this is education, based on literacy and understanding, and having “human time” to think.