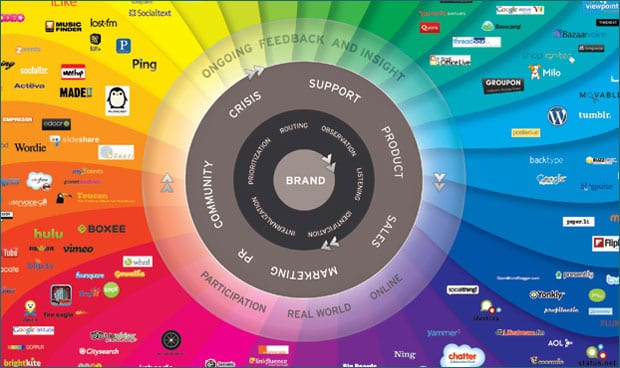 Last week I chaired the Social Media Monitoring and ROI forum for IBRC Conferences.  The two day event was much like most others in this space with a collection of participants eager to learn more about social media and, hopefully, to find that “magic bullet” and sliver of insight which would enable them to tame the beast which the Web 2.0 world has unleashed.

As I’ve learned from these gatherings, and from the numerous conversations I’ve been having over the past few years, Social Media presents a powerful new way to communicate but is fraught with danger precisely because digital interaction technologies have redistributed the throughout the communications value network and empowered the end user.  This is what Zuboff predicted and what I still think that ‘marketeers’ don’t understand.

Whilst there were numerous statements about “engaging in conversations” and “developing customer insights” the language that I continue to hear from those proselytizing social media is still very much about product.  It still focused on how best to “push” their message, in theory made more relevant because better “customers insights” can be gained through “active listening”, but driven by push nonetheless.

What I am not hearing, except from a precious few, is a genuine respect for, and deferment to, the customer in terms of more fully undersanding what they really want on their terms.  It is the end customer, after all, who makes the choice of whether to part with hard-earned resources (cash and other) in order to procure goods and services, and much of traditional marketing is about influencing that choice.  What I heard was quite a bit of discussion about social media being used as a “predictor of intent”, of being able to read signals that the customer is “ripe” for the picking, and therefore the marketeers being able to pounce and target communications to them.  To my mind this is not about serving the customer, it is about serving the organisation and the marketing machine.  And as long as this is the case then whatever metrics are put in place to measure ROI or engagement or whatever, will be those that reflect the organisation’s needs (to sell) and not those of the customers (which will vary with each and every person).

As far as I can see most social media activity by organisations is being driven by the traditional paradigm of “marketing to” rather than the Web 2.0 paradigm of “communicating with”.

One person who does truly “get it” is Karen Ganschow, now at Westpac, who has long been acknowledged as one of the leaders in understanding how to utilise digital technologies to better engage.  This is precisely because Karen brings both common sense and good manners to her work and in her presentation she alluded to what she described as the new “Kodak moment”, the fact that those who are not at least experimenting in the digital social space, will struggle to survive.  Despite all of the clever technologies marketing is still based on the principles of “Marketing 101” enhanced by the fact that

in the digital world it is vital to understand the three elements of “Online + Mobile + Social”.

What intrigued me most about what Karen had to say was how Telstra has engaged with the technical community through Whirlpool recognising that it is both a resource for technology ideas and critique, but also a potential advocacy group if engaged with on an authentic and respectful basis.  From what I heard it seems that Telstra acknowledges that Whirlpool is the community’s space (and not the domain of marketers) and therefore any measure of its effectiveness as a communications mechanism must be through the conversations which can lead to positive outcomes for all concerned, whether it be improvements to products and services, or other measures of success.

My own experience in using social media is that while some people will engage within the digital space many often acknowledge a post or comment that I have made directly to me either face to face, or by email.  This also highlights the superficial aspect of the “Facebook Like” which only takes the click of a mouse, whereas those who are genuinely interested will go to the trouble of engaging more directly via email or even that quaint old-fashioned technology, the telephone.

I often have corridor conversations or side chats about issues I have raised, but these are not measured by any social media metrics or tools.  People who engage this way rarely post themselves but are happy to ‘lurk’ and learn on their own terms.  They are also wary of some of the behaviours that may occur within social media environments, and whilst the Louise Denver and Simon Townsend from Deloitte gave an excellent overview of their very successful utilisation of Yammer, I am wary of those who say that online self-monitoring actually works.  What Deloitte have done brilliantly is to use the power of visualisation to show the power of social media connections, and be able to explain the concept in very simple terms.

Which brings me to something that has totally reinforced to me precisely who is in control of social media platforms and environments.

I recently had an email from LinkedIn which told me that the image I had up on my profile was inappropriate, despite the fact that it has been there for over a year, and is my own image reflecting how I want to be seen in the professional space.  The image I have is my logo, and I have it there for one main reason – privacy.  I actually don’t want to post a photograph of myself online so that intelligent bots can match it and market to me, and, as LinkedIn is in theory a “professional” network, I am making a choice to engage with it through this image.  Without going into the arguments about company logos etc the thing that most annoyed me was that there was no attempt to engage or have a conversation with me, LinkedIn just took my image down and informed me it was inappropriate.  This was not about me as a part of that community, it was about LinkedIn and their own marketing needs.  Whatever are their measures of engagement and success are clearly not in sync with mine.

For any who question the data ownership on social media platforms this episode reinforced that fact that it is LinkedIn who owns the data, who determines what can and can’t be put up, and who will communicate on their terms and not mine.  This is the main reason that I host my own blog, and aim to have as much of my own personal information on my own site over which I have control.  As Douglas Ruskhoff said

“if it’s free then you and your data are the product”.

The day will come when LinkedIn’s dominance is on the wane and instead of courting potential share-traders it may genuinely respect its community, but by that time I will probably have joined another network or the next phase in communications will have taken over.

How does this relate to the conference?  The only person who even mentioned the ownership of data was Peter Witts of Agenda Public Relations, but even he saw it from the marketeer’s perspective asking which department owned the data.  No one even thought of mentioning the fact that the end users themselves might actually want to own information about themselves, let alone control it.  This, of course, is the promise of the “personal data locker”, about which no one had heard.

All of this merely reinforced my own feelings that within the digital media world these are still very early days, and, as Marshall Sponder commented, “there is no best practice as yet”.  We are still playing, we are still trying to justify the time and effort we put in, and we have a long way to go.

Any discussion about “Social Media Metrics or Monitoring or ROI” will continue to be speculative until the person who is genuinely being served is the end customer, and any metrics of success are as much determined by them and for them, and not just the organisations seeking to listen in and subtly influence the conversations.

Social Media for Government
Back to basics