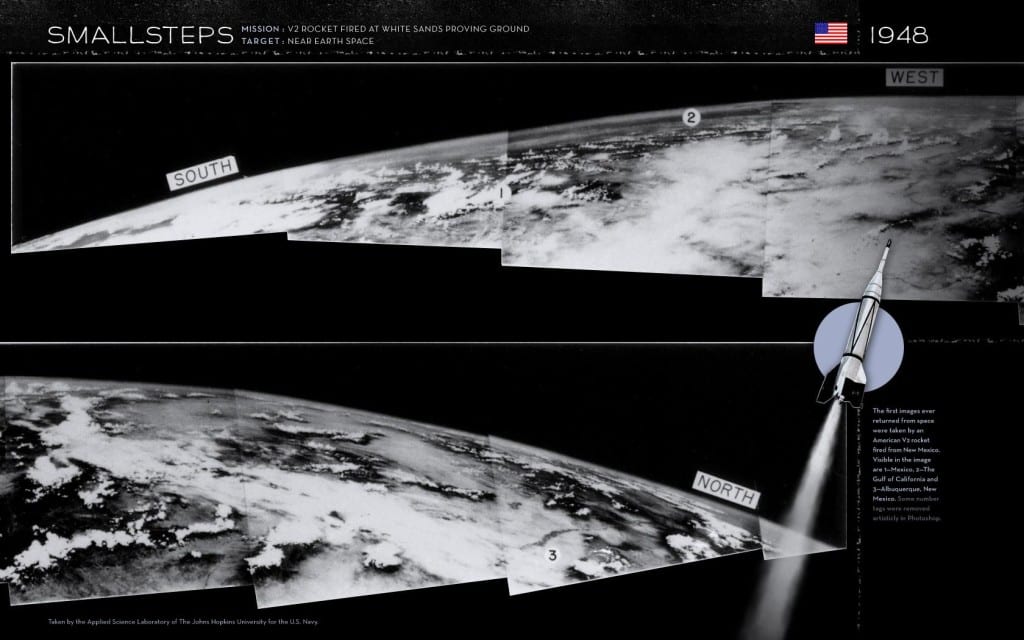 This is the first photo taken of the Earth from space in 1947.

It gave humans a new view of their world which Carl Sagan described as a pale blue dot in the Universe.

That’s here. That’s home. That’s us. On it everyone you love, everyone you know, everyone you ever heard of, every human being who ever was, lived out their lives. The aggregate of our joy and suffering, thousands of confident religions, ideologies, and economic doctrines, every hunter and forager, every hero and coward, every creator and destroyer of civilization, every king and peasant, every young couple in love, every mother and father, hopeful child, inventor and explorer, every teacher of morals, every corrupt politician, every “superstar,” every “supreme leader,” every saint and sinner in the history of our species lived there–on a mote of dust suspended in a sunbeam.

These words rattled around in my mind as I have travelled over the past few years, particularly when speaking at conferences and workshops.  One of these was the European Venture Philanthropy conference in Paris last October, where in the opening commentary our stewardship of this tiny planet was put front and centre.

EVPA seeks to create a world where philanthropy and investment combine to create social impact, and this conference is the third in the philanthropic space I have attended in recent months, each of which has attempted to address the nexus between social change and technology.  It made me think about the connection between philanthropy and the technical realm, and the fact that those seeking to do good in the world are so ill-equipped and ill-informed about technology to fully understand both its impact, both positive and negative.

After last year’s Philanthropy Australia’s biennial event I wrote my last post where I challenged all philanthropists to stand up and take the lead in determining what sort of humanity will exist on this planet in the years and decades to come.

I don’t just mean lead as in give larger and larger pots of money but Lead as in directly take on and proactively address the intellectual, moral and ethical challenges facing our species as we charge forward developing the Brave New World that is emerging.

A part of this is both defining, and redefining that world, and what our place in it is.

Whatever we believe about how we got to be the extraordinary creatures we are today is far less important than bringing our intellect to bear on how do we get together now around the world and get out of the mess that we’ve made.

Regardless of whether or not you believe that we are in a mess (there is ample evidence that humans have never had it so good) the challenge of stewardship is one that humans face both externally with our environment or internally with our own definition of what it is to be human, and the zeitgeist reflecting this is all around us.

As an example of this the second series of Humans which has aired on Channel 4 and the ABC.  I love Humans because it addresses not just the issues relating to technology, but the concomitant social issues which emerge such as the technological displacement of humans in the workforce, the ethical and moral aspects of creating sentient beings, and the innate nature of Homo Sapiens to resort to both violence and other behaviours to protect ourselves.

Gemma Chan, perhaps the most recognised actor who plays Mia/Anita, believes that

Once we’ve created something that is superintelligent, and it can replicate and self-improve, then it’s the last invention we will make.

More and more we are beginning to realise that as the Social Machine evolves we are gradually giving up crucial aspects of ourselves, especially when it comes to our critical thinking and ability to exert thoughtful and independent judgement.

So, what sort of world do we want to make, and how do we want our machines to assist us in creating this world?

In his Open Letter about AI futurist Gerd Leonhard states that:

He summarises by saying that

Silicon Valley should not become ‘mission control for humanity’. It would be great if you could inject some rest-of-the-human-tribe thinking into your plans.

I totally agree with Leonhard’s thinking, but this is a situation we have been in before, although the pace of change is different, leading to a peculiar set of problems and circumstances.

The third philanthropic event I recently participated in was the New Philanthropy Capital Ignite conference, held in London.

Commentary about Ignite can be found here but Madeleine White very succinctly summarises the points I made in her blog:

Digital tools will need to truly serve humanity instead of driving a machine that self-replicates without purpose at best, with a more sinister market-driven agenda (monopolism) at worst. Defined by principles and values, many would argue that the philanthropic sector is the only one truly qualified to create a framework that is able to ensure technology remains relevant and connected to real human need.

The spirit of philanthropy is as present in the business world as it is in the research space, and I attempted to give the same message to students of Web Science in a talk at Southampton.  My message to these young people was that Web Science is crucially important precisely because by definition it addresses the really thorny questions that face as we race almost mindlessly towards an information machine driven future.

As I have thought about this I keep remembering the words of Barry Jones in his seminal book Sleepers, Wake! who declared that science and technology have changed the quality, length, and direction of life in the past century far more than politics, education, ideology, or religion.   Some politicians, particularly in the UK, are at least having debates within Parliament stating that

The impact of AI will reflect the values of those who build it. AI is a tool that we humans will design, control and direct and it is up to us all to direct that tool towards the common good.

and at its heart

There cannot be a more legitimate object of the legislator’s care than looking after those whose livelihoods are disrupted by technology. (John Stuart Mill)

It is the responsibility of us all to Wake Up and begin to take a proactive interest in how their lives are changing, and being changed, by the science and technologies around us.

We can all be leaders within our own communities and societies, conscious that despite our anthropomorphic bias we Humans are not necessarily at the centre of where things are heading, and we are now suffering the consequences of our digital addictions (we live in a world where digital junkies are now needing Internet Addiction rehab clinics).

The social reactions to our science and technologies is just beginning, and things are going to become a lot more complicated very quickly.

Embracing and harnessing the power of information technologies of all forms – be they digital, biological or whatever – is THE most important challenge of the twenty first century.  We all need to be both consulted and educated as to how this is done because we all live on this pale blue dot together, and, at the minute, we have no where else to go.

Some of the ideas that have come up in workshops

1.  Embrace the power of the analogue!  We live in the physical world.

2.  Take responsibility for your own learning in Science and Technology (see below for some places to go as a start).

3.  Become deliberately conscious of your interactions with the Social Machine and how it is influencing your daily decision making

4.  Begin to identify, monitor and articulate your digital brand with a view to more fully understanding it as a digital currency

5.  Recognise that no one has the answers … we are all making it up as we go along!

This is not something we can outsource to our scientists or politicians or policy makers.  It is something we all need to take responsibility for.  Now.

We need to wake up!

The Centre for Existential Risk, University of Cambridge – an existential risk is one that threatens the existence of our entire species. The Cambridge Centre for the Study of Existential Risk (CSER) is a joint initiative founded by a philosopher, a scientist, and a software entrepreneur as a multidisciplinary research centre dedicated to the study and mitigation of risks that could lead to human extinction.

The Future of Life Institute – aims to catalyse and support research and initiatives for safeguarding life and developing optimistic visions of the future, including positive ways for humanity to steer its own course considering new technologies and challenges.

The Future of Humanity Institute, University of Oxford – has a mission to shed light on crucial considerations for humanity’s future whilst making the greatest positive difference.

The Leverhulme Centre for the Future of Intelligence, Cambridge University – aims to examine the morality and governance of AI by “bringing together the best of human intelligence so that we can make the most of machine intelligence”.

The Atlantic Centre for Leadership and Inequality, London School of Economics – aims to build a global community of leaders dedicated to changing policy, practice and public dialogue around inequalities.

We’re all being transformed, whether we like it or not …
Intersticia Manifesto – a continuous work in progress