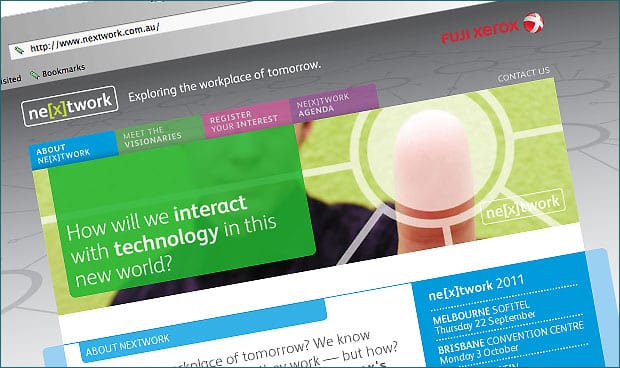 Every year that I’ve been involved with FXA they create a traveling roadshow which brings together aspects of their thought leadership and their technologies, and ne[x]twork was certainly that.

The focus was on the “future of work”, and featured three virtual presentations from Dr Thomas Frey, Executive Director and Senior Futurist at the DaVinci Institute and currently Google’s top-rated futurist speaker, Dr Larry Rowe, President of the Fuji Xerox research labs at Palo Alto and Francois Ragnet from the Xerox labs in Grenoble, France, with whom I’ve worked for a number of years.  As a complement to this there was one “human” presentation by Mike Walsh, CEO of Tomorrow (of whom I’ve written about previously).

It wasn’t the technologies that were really important here, it was the inter-relationship between the emerging technologies that are now ever-present in our daily lives, and what impact these are likely to have on the way we work.

Thomas Frey talked about the digital and physical interface, particularly in terms of what he described as the “boundary-less” nature of consumption, stating that

“for consumerism to make sense it will move into the digital world, because there are no boundaries”.

From there he went on to articulate the coming together of the major trends enabled by digital information including:

Frey seems convinced that digital systems were going to prevail, and that because people make decisions today based on their interpretation of what the future holds, therefore the future can determine the present.

One area of focus for Frey was the changing concept of literacy, from the original idea of reading, writing and thinking critically, to being about to get information into our heads and the process of creating mental concepts and images.  This is an intriguing thought, and one that Frey explores in his book “Communicating with the Future”.

As a complement to this Mike Walsh asked to what extent are our brains shaped by the technologies around us.  There has been a lot written about this in recent years, and an excellent article can be found here.   Walsh contends that because the emerging cohort of humans born during and after 1994 have a radically different experience of the past from us, they will create a very different future.  What resonated for me was that from the outset Walsh brought the human in and referred to the work of Genevieve Bell and to the future emerging from “messy customer insights” not the strict routine of R & D labs.  Music to my ears!

For companies such as Xerox and Fuji Xerox this has significant implications and much of my research over the past decade has related to precisely this, especially with regard to the distance that exists between the sales and marketing sides of an organisation, and the side that actually develops the products and solutions from scratch.

I have been both fortunate and privileged to wander around the Xerox research world for the best part of the last decade, and have got to know a number of the researchers and the places in which they work.  The presentations by both Larry Rowe and Francois Ragnet were based on ideas and concepts that have been in development for decades, and are now coming together and emerging within products and services that the parent companies are bringing to market.  But, the challenge for all of these organisations is the shortening time to market for new innovations, and the grindingly slow speed with which they operate.  I recall Hadi Mahabadi, Director of Xerox’s Canadian lab, saying this to me in 2004 when I first visited them, and each subsequent visit only further reinforces it.

Whilst I would not expect either Larry or Francois to talk about the cutting edge and highly sensitive new innovations what they did reveal were concepts that are now becoming main-stream, and which tackle the information challenge, but not necessarily the people one.  Thomas Frey seemed to ignore this as well, but Mike Walsh placed it firmly at the centre of his talk.

The truth is that it is not the technologies that are at the cutting edge now, it is how we use them.  It is now becoming the time of the “anthropologist”, as I have commented before, and Mike explores this in his blog and interview with Genevieve.

What worked for me at ne[x]twork was that some of the issues that many of us have been grappling with for years were put squarely on the table, and that they were taken mainstream so that people who don’t necessarily question these things may have left thinking slightly differently.  They may begin to question the future, but do so in a way that is both constructive and enthusiastic, rather than apprehensive and anxious.  And hopefully they may realise that the link between research and product now involves them more than ever before, that they too can contribute to this growing body of knowledge and help to shape the future, rather than just passively accept it.

L’embarras du choix – the reality of shopping in the web driven world
We are digital amateurs, one and all