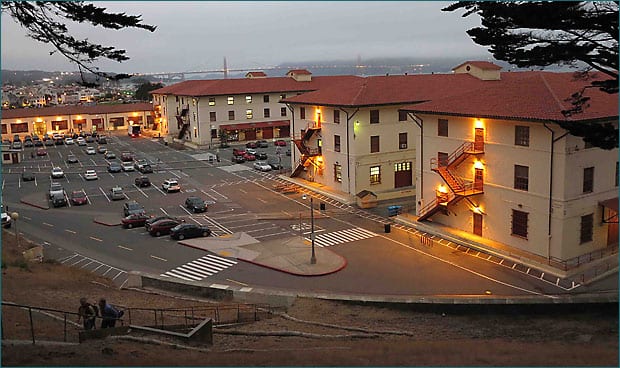 I have just returned to Australia from my international wanderings, and, in particular, hot on the heels of having attended SOCAP14.

SOCAP14 is the 11th conference hosted by SOCAP which aims to “accelerate the new global market at the intersection of money and meaning” through “having productive conversations between investors, entrepreneurs, policymakers, and industry to establish business standards in social impact.”

The conference is held at Fort Mason, San Francisco, an old fortified military base established by the Spanish in 1776 and claimed by the US Army upon California’s entry to the Union in 1850.  The site was used to defend against potential Confederate attack in 1863, and, following the Civil War, served as the military headquarters for the US Army on the West Coast, as well as the port of embarkation for military supplies and personnel from 1909 to 1962.  The Center itself was established as a Non-Profit organisation in 1977 and is now home to many Arts organisations as well as a venue for major non-profit events.

So, it is a fitting place to host SOCAP with views over the Bay and the Golden Gate bridge on both foggy mornings and gloriously sunny afternoons.

SOCAP aims to bring together individuals from around the world (I found mainly from the US) who want to”free up private capital for social use” (so said Judith Rodin, President of the Rockerfeller Foundation).  The theme of 2014 was very much “Impact investment” but there were also sessions on “resilience investing”, digital currencies, internal leadership, how to work with “Millennials”, and on human centered design.

When I got to SOCAP I was asked some of the questions captured in the image below, and I was the first (and only!) participant to link Australia and “Wildcard” in terms of my aspirations in attending the conference.  As always, I was looking for the “zaggers“, those who were doing things a bit differently, and looking for new ideas and insights, and I vaguely hoped that I would have some “left of field” conversation along the way. 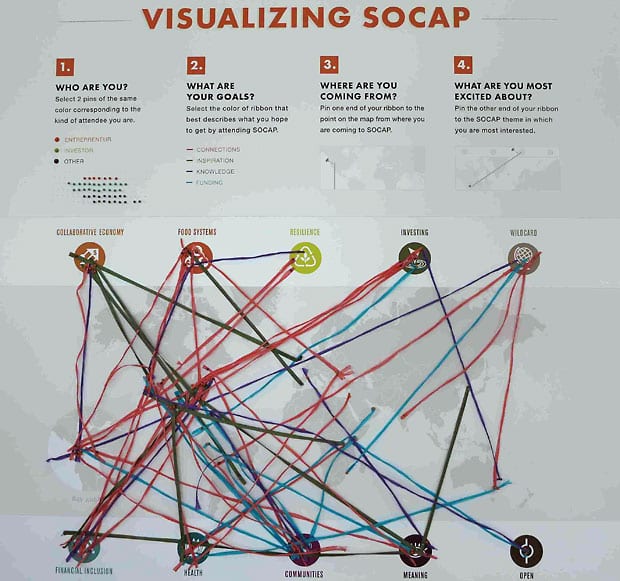 In this regard, whilst I met some really interesting people who were doing some quite inspirational things, I was a little disappointed, and I did hear a few comments about the unbelievable wealth that was being bandied about, as well as the slew of projects which seemed to be well intentioned, but perhaps a little paternalistic in their outcomes (i.e. rich people from first world countries telling poor people from poor countries what to do).  There was one session on “Disruptive Giving” which described a number of projects which were certainly “different”, but I’m not sure that they were necessarily “disruptive”, even though they were achieving some good outcomes.

The only session that came close to fitting my bill was that on “The Nature of Investing” where Katherine Collins described how looking to “natural systems” such as “biomimicry”.  She very simply asked “have we forgotten how to engage with the world around us” and quoted Einstein who once said

“Look deep into nature and you’ll understand everything better”

This certainly resonated as I wandered around Fort Mason and it brought together some of the thoughts that I have had as I’ve been travelling around the US.  As an Australian chap I spoke to, who has lived in the US for the past decade, commented “The US has the best of worlds, and the worst of worlds, where 5% of the wealthiest individuals are incredibly generous and the remaining 95% couldn’t care less”.  Wealth does certainly seem to dominate, but that “wealth” is more than just money, it is resources, space, energy, inventiveness, and an almost overwhelming “can-do” attitude that can be almost exhausting.

I have been reading “My Promised Land” by Israeli author Ari Shavit and I came across the following phrase:

“When imperialism, capitalism, science and technology combine nothing can stand in their way”.

As I travelled around the US I couldn’t help feeling that the US really is a manifestation of “human energy let loose”, relatively unfettered by government regulation and rules, and set free upon a fertile land with a demand for freedom and an abundance of resources.
Most people in the US have, like many other nations, come from somewhere else, either running away from persecution and tyranny, or running towards promise and opportunity.  This has led to a political and economic dominance that has shaped much of the Twentieth Century, but, it could be that things are about to change as this recent article demonstrates. 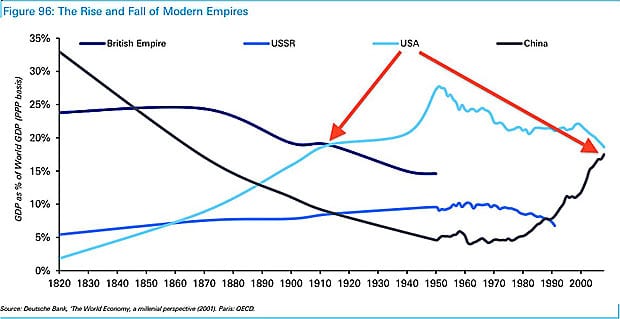 There is no doubt that the world is becoming more fragmented, with areas of strife increasing in most of the major hot spots (as I write this Australia has been placed on “high” terror alert) but as I wandered around SOCAP and had so many conversations with people who all wanted to “do good” and improve life on the planet, I just couldn’t help wondering why we, as a self-professed “intelligent” species, just can’t seem to move beyond the “tyranny of the ‘or’“, where one “tribe” has to dominate another, towards the “power of the ‘and’” (to quote Jim Collins).  So much energy is being put into so many projects which could all be made that much more successful if people were more collaborative, less competitive, and were guided by tolerance and respect.  Personally I would like to hope that both China and the US lead in the twenty-first century, bringing forth an amazing combination of their cultural talents and unsurpassed capabilities.

As I thought about this I thought about the decline of the British Empire, also described in the above graph.  As someone from a British Dominion I have always found that “Britishness” is something that pervades at a very deep level, without the need to dominate or control.

Whilst the Brits certainly weren’t model conquerors they have managed to maintain a “deep certainty of Identity” as “with a continuous way of life and a civilized manner in which it conducts it’s affairs.” (Shavit again)

The thing I love about the Americans is their deep generosity combined with their heartfelt desire to “do good” and their courage to “just do it”.  I had a number of conversations about this at SOCAP and it made me reflect on how Australians approach innovation and social enterprise.  I would like to think that our most powerful characteristic is the ability to bring together our “Britishness”, which still pervades in our systems of governance, and our fairly laid-back attitudes, with the youth and vigour of being a young country with some of America’s energy.

We will never dominate, nor do we really aspire to (except in sport), but what we can do is bring together a sense of humour and a bit of an Antipodean laid-back “she’ll be right mate” perspective to bear on problems that are best mulled over with a glass of wine watching the sunset at the beach.  This is what I would like to do in both my work with Web Science and with the Intersticia Foundation.

It’s good to be home, but it’s also good to be connected to the rest of the World, and to appreciate one’s place in it.

Forgetting and remembering in the digital age
Solomon Lecture 2014