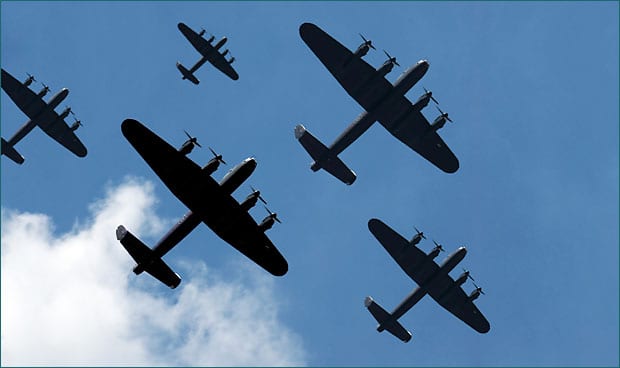 Every now and then I am involved in something which reminds me of how very privileged I have been in my life, in both the people I have known and the opportunities I have had.

Last week I went to Canberra for the launch of Peter Rees’ latest book “Lancaster Men” in the Officers’ Mess at ADFA. It was fun to go to AFDA, which I’ve never visited, despite all of my years hanging around at Duntroon in my youth. As I wandered around I recalled my father’s scepticism about creating a tri-service academy which, he felt, could potentially dilute and undermine the culture of each of the services. That culture was born from a shared history and shared experiences, and, all too often, the painful memories of the past which the rest of us can all too easily forget.

“Lancaster Men” tells the story of “Bomber Command” during the Second World War, and my involvement came about because Peter’s niece is an old friend who connected us when she knew that he was writing the story. My father, Air Marshal Sir James Rowland, was a Pathfinder who flew Lancasters, and I was able to contribute his story based on his own writings together with trunks full of “stuff” which is in my garage.

The launch attracted some of the few remaining Bomber Command veterans, together with family, friends and some who were just interested, and, although I vaguely remember names mentioned over the years, there were few that I actually knew. I always find it a humbling experience to be a part of these types of gatherings where our elderly heroes celebrate the escapades of their youth, not with fabricated and hyped-up stories, but with the brave and honest truth.

These men were adventurers, who not only set out to face the challenge of war, but who  took on the vagaries of the relatively new technologies of flight and airborne armaments, and were a part of the one of the most costly WWII exercises in terms of lives lost. More than 125,000 men from Britain, Australia, New Zealand, Canada, South Africa and Poland flew bombers against Nazi Germany, and of those, some 55,573 were killed. Around 10,000 Australians were part of the Bomber Command operations, and 3,486, over a third, died on active service.

“The fighters are our salvation but the bombers alone provide the means of victory.”

Despite these words there was no post-War recognition of Bomber Command, nor the issuing of any campaign medals. This was, it seems, due to the controversy surrounding the large-scale area bombing strategy which resulted in the destruction of numerous Germany cities, most notably the city of Dresden killing around 25,000 civilians. It was only in June 2012 that a memorial to Bomber Command was unveiled.

A key part of the bombing strategy was to have 24-hour coverage, and, at the peak of the campaign, around 1,000 heavy bombers would attack on any one night, with up to 10 per cent of aircraft and crews failing to return.  My father was one of those “missing in action” due to a mid-air collision over Germany which resulted in him spending the remainder of the war as a POW, or a “guest of the Chancellor”, as he used to say. My father’s story, like so many others, displays courage, fortitude and bravery, and these experiences were undoubtedly foundational in terms of his career success.

These accounts are priceless, not only in order to understand our own military and political history, but in order to explore and appreciate the concept of leadership within a context that few of us will ever experience. This is something that Air Chief Marshal Angus Houston, one of our most thoughtful contemporary leaders, commented on in his speech to launch the book. As I was going through some of my fathers material I kept on thinking about how our own young people are not taught enough of this, nor given examples of genuine heroes to look up to, admire, and seek to emulate. Instead of the school syllabus filled with Australian “folklore” based on bush-rangers and explorers, combined with the manufactured and marketing-driven Hollywood “blockbusters” that overwhelm our screens, wouldn’t it be wonderful if there were more well-known authentic stories of bravery based on very real heroes, some of whom are still among us?

The concept of the hero, and the myths which surround them, are something fundamental to human nature. As Karen Armstrong, argues in her “Short History of Myth”:

“Mythical thinking and practice had helped people to face the prospect of extinction and nothingness, and to come through it with a degree of acceptance. Without this discipline it has been difficult for many to avoid despair.  The twentieth century presented us with one nihilistic icon after the other.”

“We still seek heroes … The myth of the hero was not intended to provide us with icons to admire, but was designed to tap into the vein of heroism within ourselves.”

Leadership is not a commodity that can be packaged and sold, it is not something that has a ten-point plan, nor is it something that anyone can do at any time. The ability to lead yourself, let alone others, is something that we all recognise when we feel it, and the ability to recognise true bravery, courage and sacrifice is something that is innate in us all, but often the product of dire circumstances. Stories such as those told in “Lancaster Men” show how individuals can rise to do remarkable things when required, and it is often the quiet achievers who do so without hesitation or question.

I heartfully thank Peter Rees for choosing to include my father’s story, just one among many, of brave souls who fought for what they believed, and paid the price in their own personal way for the rest of their lives.