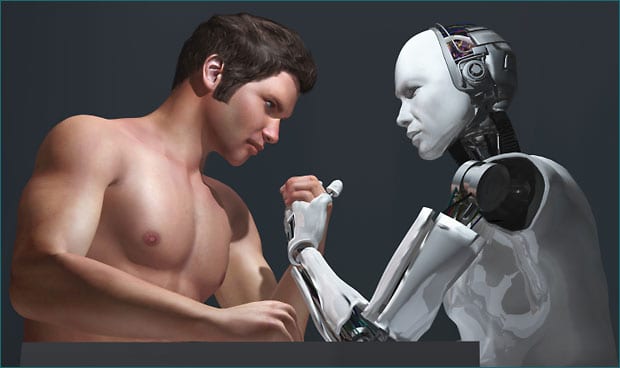 Last week I attended the “Humanising the Robot Economy” at Nesta, which was essentially the launch of “Our Work Here is Done: Visions of a Robot Economy”.

This, together with the “Fourth Revolution” at the RSA, reinforced for me the challenge we are facing as a society to both understand the integrate this current “revolution” being driven by digital information and interaction technologies.

The panel of speakers included:

The event was moderated by Stian Westlake, Executive Director of Policy and Research for Nesta, and brought together a range of expertise and perspectives to do with how “robots” are, and potentially will, change the economy and the relationship between humans and “work”.

Discussing “robots” can be quite an emotional topic because throughout human history the idea of “automatons” has persisted as “artificially alive devices” which can be viewed as either friend or foe – something that is of benefit to human society and something that is a threat.

Encyclopaedia Britannica defines a robot is “any automatically operated machine that replaces human effort, though it may not resemble human beings in appearance or perform functions in a humanlike manner” and Merriam-Webster describes a robot as a “machine that looks like a human being and performs various complex acts (as walking or talking) of a human being”, or a “device that automatically performs complicated often repetitive tasks”, or a “mechanism guided by automatic controls”.

In all cases the idea of a “robot” is of something that is independent of human connection, because of its “autonomous” nature and the focus on mechanical and, more recently, information engineering. But what I feel is missing in this conversation is the emerging science of bio-engineering and “bionics” and “the transfer of technology between lifeforms and manufactures”.

Let’s have a think for a minute about what is on the horizon.

Firstly, the augmenting of our “knowledge” and “information” through both personal computing, be it our smartphones permanently grafted to our palms, Google glass on our faces or our Fitbits and personal health monitors.

Secondly, the augmentation of our physical selves through the replacement or amendment of body parts (pacemakers, artificial limbs, cochlear ear implants).

Thirdly, the emerging “internet of things” where anything that can be connected to the internet via wireless technologies is being connected, uploading real-time data and increasingly integrating our physical selves to the digital universe.

As the conversation at Nesta unfolded I kept thinking about the legacy of Descartes in terms of dividing how we see the physical and social sciences, the “man in the machine” perspective, where there is a division between us and the world around us. I felt that the “robots” discussion was pretty much limited to this separation, and came away feeling that something really crucial was missing.

In his book “Built to Last” Jim Collins talks about “the tyranny of the ‘or’, and the power of the ‘and’”, and the importance of being able to consider all options at times when we are often encouraged to make a single choice. I have always subscribed to this view, and what I think was missing in the “robot society” conversation was the lack of focus on the potential convergence of humans AND machines (not necessarily Cyborgs) but certainly a much closer inter-relationship and integration, with boundaries that are increasingly blurred and ambiguous.

My intuition is telling me that this is where the real “robots” are going to have the greatest impact, and we have the early stages of this already in the concept of the “social machine”. What concerns me is that if we continue to bifurcate and divide the way we think about humans and “robot” technologies then not only will we miss out on the real opportunities, but we will be unaware of the real threats.

So, are we talking about “humanising the robot economy” or “roboticising the human economy”?

I believe we are on the brink of some crucial decisions for humanity at the minute and there is a crucial need to educate people in order to make at least a somewhat informed choice about the world they want to create. There are some exciting initiatives now under way which include:

All are contributing to the development of a “digital literacy”.

Brain, soul and spirit food
Observing the Web as a way of making sense of a world of “wicked” problems