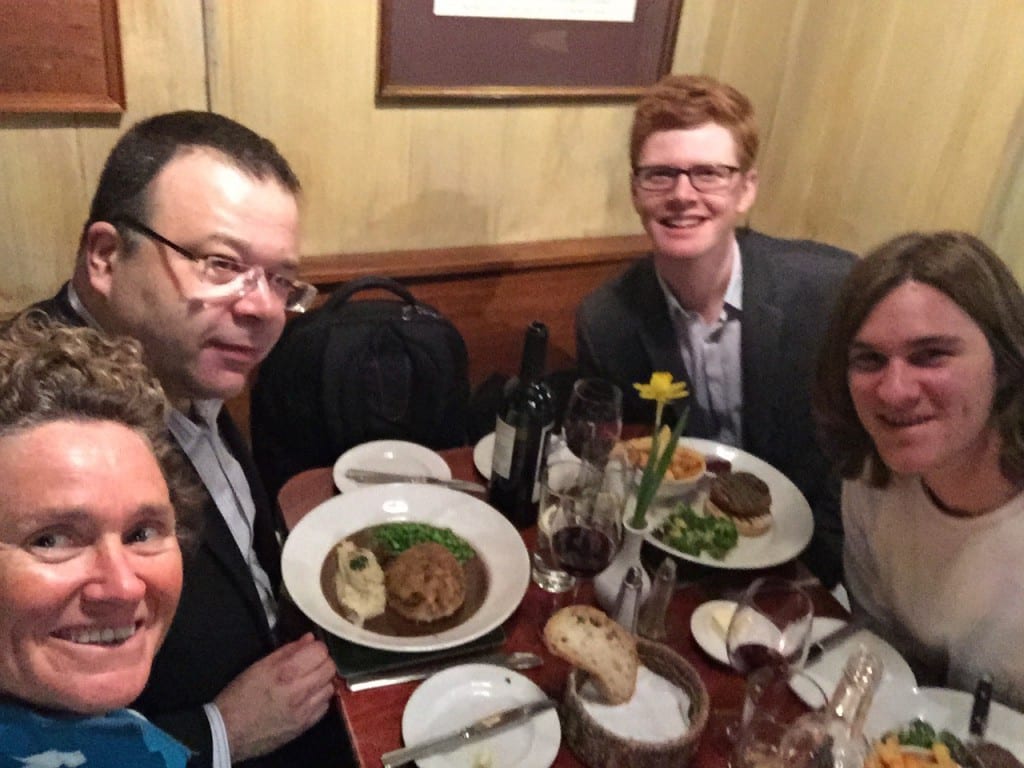 It seems to me that that there is a lot of talk about the need for people and organisations to be more “innovative” and “creative” as the knowledge economy evolves and the need to manage and work with rapid change confronts us all.  But doing things more “smartly” or more efficiently doesn’t necessarily lead to doing them better, nor being able to ask if they should be done at all.  Perhaps what we need above all is the ability to think anew about the world around us, and to embrace the unknown as much as the known.

It was Einstein who said that

As our Intersticia Foundation develops I am realising that enabling this is at the core of what we are trying to do – not to encourage people to be more innovative or creative, but to give them the space and time to just “be” in the interstice  between what is and what could be – to imagine things differently.

Our first Rowland Scholar, Dr Lionel Nizigama, who has been working in Mali helping setting up Ebola rapid response teams in different regions, has taught us many things about the different perspectives we need to adopt when deciding who, and what, to support.  All too often we define the world through what we know, but the real gems come from what we don’t know, and this is the magic from which true imagination, inspiration and change, can grow.

When I had dinner with Lionel last year and we talked about the scholarship and my own aspirations for it, he reminded me of Martin Luther King’s advice that

“You don’t have to see the whole staircase, just take the first step.”

Lionel was a wonderful “first step” and we have heeded his advice.  He has helped us clarify in our own minds the type of person we want to support, and what being a “Rowland Scholar” actually means.  This is still very much a work in progress, but thus far we have identified that we are looking for people who can demonstrate:

For 2014 – 2015 there was a strong field of candidates from all over the world, but the standout was Hamish Laing, who is our second Rowland Scholar (he is pictured here with Mark Lewis, Director of Development & External Relations for Goodenough College, my son Lachlan and me earlier this year in London).

Hamish hails from Wellington, New Zealand having completed a degree in Mechanical Engineering at the University of Canterbury.  He is now studying for a Master of Science in Sustainable Engineering at Imperial College, London, with a particular focus on “sustainable energy systems and overcoming global challenges of demand and carbon emissions”.

In the letter he wrote to me shortly after arriving at the Square Hamish said:

“I intend to make the most of my time in this fantastic place but to also to give back to the community and I have recently been appointed co-environmental officer as part of the Members Council.  In this role I hope to carry out two main projects; the first to encourage an energy literacy programme at the College which will teach people about energy usage and what energy related terms mean.  For the second project I hope to carry out an energy assessment of the College over the year and identify opportunities for increasing efficiency and reducing energy usage.”

He had also identified what is so magical about life in Goodenough College:

“It has been fantastic to meet people from so many different backgrounds and cultures and you surely wouldn’t find the same diversity anywhere except a UN meeting.”

What Hamish is discovering is a much bigger world through a diversity of people from all walks of life who have come to London to find their own way of imagining a different future, and the role that they want to play in it.  And what he and Lionel are teaching us is that the form of patronage we wish to undertake is not one where we simply hand over the cheque and have our name on a website, but rather one where we develop a relationship with some very special people who will, in their own way, go on to change the world.  Both Lionel and Hamish have agreed to work with us as the Rowland Scholarship evolves, and we have a number of ideas as to how we can create a cadre of scholars who mentor each other, whom we continue to support in maintaining their links with London and their Goodenough experiences over time, and who can give back to the College more broadly through their own life experiences.

These lessons are also helping us define what other sorts of initiatives we might want to be involved with such as:

With this in mind I met up with Bell Shakespeare late last year and when I described what we were doing in London it became immediately apparent that they had an emerging project that was highly complementary, the Mind’s Eye Fellowship.  This project provides a mid-career Writing Fellow with two days a week of employment with the Company for up to two years, giving them the time to focus wholly on their writing and benefit from desk-space and the practical resources offered within a major performing arts organisation.  It also creates a mentoring environment as successive Fellows come on board over time.

In other words, it gives them the space to imagine.

We decided to support this project almost immediately, and for 2015 our first Bell Shakespeare Writing Fellow is Kate Mulvany, an award-winning actor, playwright, dramaturg, screenwriter and writing mentor, who has previously appeared in Bell Shakespeare productions of Tartuffe, Macbeth and Julius Caesar.  Her plays include Masquerade, Medea and The Seed.

We welcome both Hamish and Kate to our network, and look forward to working with them in whatever ways we can.

I believe that “philanthropy” is not just about financial support – it is much much more.  It is as much about creating a partnership between those who “give” and those who “receive” in whatever “currency” is appropriate and relevant – be it time, networks, knowledge or just listening.   It is about collaboratively creating something bigger together, imagining a better future for ourselves, our communities and our world through drawing on what is the best in humanity.

For us this journey has just begun.  As we continue we know that we will grow and learn, and hopefully show the way for others who are interested to do likewise.