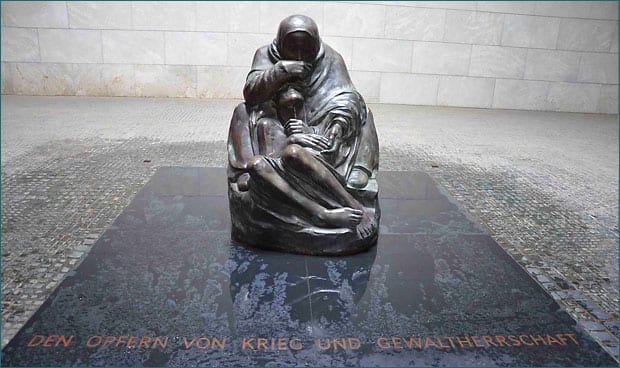 When I was in Berlin last year the one memorial that completely overwhelmed me was “Mother with her Dead Son”, by Käthe Kollwitz in the Neue Wache.

I always feel that Berlin is a sort of  living “twilight zone” which exists on the border between sanity and madness: the place where it is acknowledged that some of the worst atrocities ever perpetuated by one human being on another were conceived, advocated and directed; but also the place where a combined irreverence manifested by pop-culture and artistic experimentation is seamlessly mingled with a deep respect for a culture and history spanning thousands of years.

The Neue Wache was originally designed by Karl Friedrich Schinkel in the early 1800s and, in 1931, architect Heinrich Tessenow reconfigured it as a memorial for those who had fallen in World War I. In the 1960s, after having been both bombed and looted in World War II, the East German government restored it as a “memorial to the victims of fascism and militarism” and, in 1969, buried the remains of an unknown soldier and an unknown concentration camp prisoner, surrounded by earth taken from the battlefields of World War II and from concentration camps.

After German reunification, the Neue Wache became the “Central Memorial of the Federal Republic of Germany for the Victims of War and Tyranny” and, under the oculus, stands Kollwitz’s “Mother with her Dead Son”.

I have just revisited Berlin as part of a trip to Germany, Poland and the Czech Republic, and, apart from meeting up with my daughter’s host family in Dresden, the one thing that I really wanted to do was to visit Auschwitz-Birkenau.

Auschwitz is a place which needs no introduction, and, as we travelled by bus from Krakow, what struck me was the stark contrast between visiting an “extermination camp” developed to systematically and mechanically rid the world of the entire Jewish “nation”, and the carefully tended cemetries which dot the countryside along the way. I have never seen so many fresh flowers adorning tombstones looking so well-tended and cared for, and as we approached Auschwitz I could not help but think about the added insult for Polish Jews to have had no respect paid, or honour given, to their dead.

At Birkenau near the crematoria there is a pond which contains the ashes of many of the victims, and this, together with the very brave stories of so many people who faced an horrific death, haunted me for days after my visit. This was reinforced by my reading of Elliot Perlman’s “The Streetsweeper”, particularly the stories of the Sonderkommando and their tragic, but heroic, fate.

After Auschwitz we spent some time in Dresden, the city famous for not only being one of the most beautiful as the centre of cultural life created by the Electors and Kings of Saxony, but also held up as a symbol following the bombing of the city centre by the Allied Forces on 13th and 14th February, 1945.

As I visited the Stadt Museum, which gives a fabulous overview of the city and its history, I came upon this description of the city in World War II, and I will quote in full:

“The destruction of Dresden began in 1933, with the Nazis coming to power, the terror of the SS on the streets, and the violence of the early concentration camps. Jews and political opponents were expelled from their positions in the city’s government, and cultural life. Jewish shops were boycotted.  The Dresden exhibition Degenerate Art in September 1933 became a model for a campaign against modern art in many Germany cities. In the following year, Dresden’s Reichstheater-woche, or National Theater Week, was dominated by Nazi parades.  All public life – willingly or unwillingly – was bought into line with the Nazi regime. Only a small minority resisted.

“In 1938, the Dresden National Socialists burned down the old synagogue, designed by Gottfried Semper. Those Dresden jews who could not make it out of the country in time were persecuted and tormented: most were deported and murdered. Many Dresdeners participated – as soldiers or in the war industry – the Second World War, and many local businesses profited from the exploitation of prisoners or war and forced laborers.”

This is a very brave and honest statement, and what never ceases to amaze me in parts of Germany I visited, and in talking to my friends, is the willingness to face up to the atrocities which occurred during the Nazi era, but also the resilience to move forward and cautiously become one of the most powerful nations of the early twenty first century.

The city of Dresden embodies the challenges of rebuilding a city that has been destroyed multiple times, but it is also symbolic of the powerful role that communications play in human evolution. The Stadt Museum also clearly demonstrated the rise of Dresden as a major industrial city, but also its downfall as the East failed to keep up with the revolution in the Information and Communication Technologies industries which developed in the West, particularly in the US.

The Germans have traditionally led the world in terms of physical manufacturing, and this is what nearly won them World War II, but it was the rise of the digital world, and the “knowledge economy” that was a catalyst for the fall of the Iron Curtain and the opening up of the East. In a controlled economy there is little room for innovation and creativity, and the power of the mind cannot be controlled by the State, even in a Totalitarian Regime, for ever.

As we were travelling my daughter asked a very simple but pertinent question:

how can we avoid a repeat of the horrors such as the Holocaust?

The only answer I could give her is through always revealing the truth through knowledge, and always facilitating knowledge through authentic communications. My hope is that we are entering a world of “authenticity”, where it becomes difficult to hide things, and the default for all regimes becomes transparency, openness, and trust.

With this in mind perhaps the push will come from the private sector driven by “the market”, i.e. the people, as illustrated by the recent letter to the Obama Administration from the Center for Democracy and Technology calling for more NSA transparency.

The human spirit is a remarkable thing, and, as the horrors of the 20th Century showed, humans can be amazingly good and woefully bad.

In the end despite all of this the only thing left is hope, and perhaps that is the message of the Neue Wache after all, that despite tragedy and sadness, the enduring power of love is something that we can all understand and relate to, and perhaps might save us.

The Laramie Project
Moving towards a more “examined” world