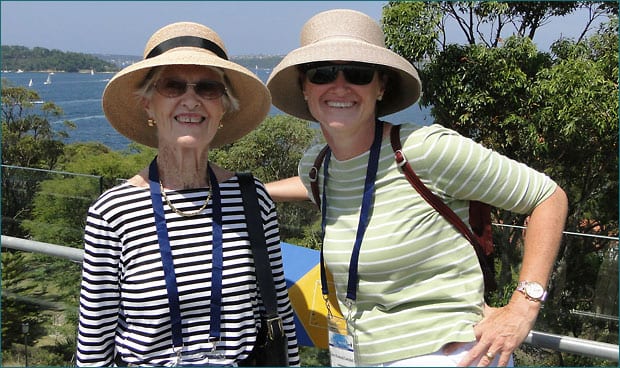 This is the text as delivered at my mother’s funeral on 22nd December, 2011, St Mark’s Anglican Church, Darling Point, Sydney.

The one word that resonates with me when I think of my mother is “ever-present”, she was just always there.  She was on the end of the phone, the end of a text or an email, and always available for a cup of tea or a gin and tonic.  I told her everything, and I had the first brutal realisation of not being able to do so this week when I came home from a meeting.

My early memories were of a beautiful, elegant, dark-haired woman with piercing blue eyes and a steely will.  Dad and I were both a bit unpredictable, more emotional, and could go up and down.  Mum was always calmly consistent … she was always the same, and she never waivered in her core.  Even last week as Sam, Lock and I were blubbering away in the hospital she just looked at us in that reassuring way, and I knew that she was totally in control, as always, right up to the end.

When I was young my Dad was my God, I went to him when I was upset, I played around in cubby-houses and billy-carts that he built, and I got dirty in the bush with him.  I rarely cooked cakes, never played with dolls, and never played at being ladies with make-up.  Mum must have been a bit disappointed with that in some ways, but at least she had some relief when Susan came along, and I will always remember meeting people in the Woden shops who’d look at Susan and say “so this is your daughter”, whilst I stood awkwardly on the side.

It was Mum who called the shots at keeping me in boarding school when Dad would have pulled me out;  it was Mum of whom I was terrified when I got suspended and sent home for a week; it was Mum who I always had to convince of things because I knew I’d get Dad’s approval.  But it was Mum who made my friends feel welcome and opened our home to all and sundry who came to visit.  It was also Mum who gave me the wonderful blessing of having two mothers with Joanie taking care of me at school.

My relationship with Mum changed from being purely mother-daughter to becoming real friends when I lived in Europe, and I made a surprise visit to their hotel in Paris.  Whilst Dad read his book in the hotel Mum and I wandered the streets of the world’s most beautiful city in which we had both lived, separately and together, and we shared our favourite galleries and coffee shops.   She always loved to travel and she and Joanie had many trips, both with Dad and on their own.  My only regret is that I didn’t get her to India, but as Mum would say

During our time at GH Mum very much held the fort whilst Dad and I rebelled – he used to go “AWOL” to the hardware shops in the city and get the police all in a panic; I held lots of noisy tennis and dinner parties and a number of you here share those memories of climbing flagpoles and skinny-dipping in the pool, often whilst Mum and Dad held an official function in the ball room.

“a classy, relaxed warmth with no pretensions of grandeur, just a humility and innate understanding.”

Things changed again when Dad died and this is the only time that I ever saw her even slightly unhinged, but I never saw her cry.

In the last twelve years she found her own voice and become a successful woman in her own right, on many fronts.  She was in every sense “Chairman of the Board” and she proceeded to combine a canny business nous with an innate curiosity that meant she was always interested and, yes, “ever present”.

Whenever I had a dinner party, to which she was always invited, and always a central figure, she’d say

“And mother comes too!  Darling, you don’t want me there all the time!”

To which the answer was always “of course I do!!”  And so did everyone else.

In the end it was the Christmas ham that signified it all.   I suddenly realised that I had forgotten to ask her where she’d ordered it from, and whilst Joanie’s detective skills eventually solved the mystery I can see her laughing and saying

It’s all of these things that I will miss desperately, and as we talked last week I said to her “Mum, you can’t go!  You’re my best friend!” …

She just looked at me and said

“You’ve got two new best friends now, you need to focus on them.”

You can see it in their eyes,

in tender hugs and long good-byes,

a love that only mothers and daughters know.

You can see it in their smiles,

through passing years and changing styles,

a friendship that continually seems to grow.

You can see it in their lives,

the joy each one of them derives,

in just knowing that the other one is there…

To care and to understand,

lend an ear or hold a hand,