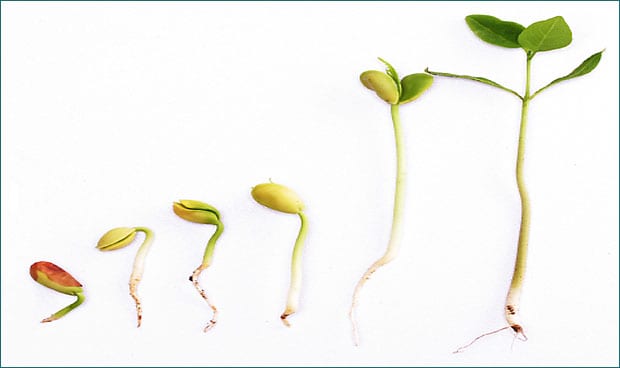 In my last post I began to explore the notion of transparency, and to ask how digital technologies are influencing us all on a personal – group – tribal – organisational and even national scale.

What is emerging is the concept of the “digital brand” which I have come to understand more fully over the past couple of years as I have been exploring the digital world.  Since the late 1990’s much of the work which we did (through GAMAA, Print21 and the C2C Project) focused on how digital technologies are changing knowledge intensive industries, and impacting on markets, skills and organisational structures. Print21 was a government funded project looking into the viability of the printing and publishing industries within the electronic marketspace; C2C investigated how digital media would influence the “creator to consumer” process.  Each built on the other and in 2006 led to the first government funded ARC Linkage project int0 the publishing process itself.

This research, led by Fuji Xerox Australia and RMIT University, investigated the impact of the so-called “semantic” (now becoming known as Web 3.0) technologies on printing and publishing, the results of which are available in a fairly weighty tome “Towards a Semantic Web: Connecting Knowledge in Academic Research“. Whilst it was fairly academic we did discover a network of people around the world who were involved in semantic technologies, and to our second ARC, “Semantic technologies and Sustainability Reporting” (www.circlesofsustainability.org). Now entering its final phase this work looks at how organisations are beginning to appreciate the need see themselves holistically and from a multi-dimensional perspective:  in our case we use the four dimensions of environment, economics, politics and culture, an approach which is now gaining traction through the concept of “Integrated Reporting”.

The outcome of an integrated reporting approach, underpinned by digital information gained from multiple sources (including internal and external stakeholders), is, in fact, a digital brand. But what exactly does this mean?

The first is that of “digital”, which means a way of processing, storing, transmitting, representing, or displaying data, and this specifically relates to the ability of electronic  technologies to generate, store, and process data and information represented by non-continuous values. I have referred to the characteristics of digital technologies, in contrast to analogue, in an earlier post.

The second is that of “brand”, which traditionally means the representation of the holistic sum of all information about an entity which taken together can form its “identity”. It can refer to any discrete thing, from an individual person to a product, group or organisation, and even a nation state. According to Manuel Castells, who coined the term “network enterprise”, a brand is

“the cultural dimension of the global market, and the process by which individuals assign meaning to their consumerism”.

This notion of “brand” represents how I, as a consumer, constituent or citizen, perceive and make sense of the world around me through filtering complexity and information abundance. It is in fact an experience because equally it represents how I, as an entity, see myself, and of how that self-perception is expressed in my behaviours and actions. And “I” am no different to a group, club, company, NGO or government agency – each has a “brand” which manifests through its personality and influences how others perceive us. Thus, the duopoly of “the self” is what is expressed in the brand, a conversation which I recall having with numerous HR and marketing managers over many years as I tried to define “marketing in and marketing out” – the challenge is that they each see it from their own “in” or “out” focus, rarely is it seen as being fully integrated and thus authentic.

In the digital world, and particularly one enabled by Web 2.0 technologies, an entity’s brand becomes far more transparent and less easy to manage and control. References to the entity, posted either formally or informally (and by all stakeholders regardless of “authority”) are increasingly easy to find, and very difficult to hide. Thus, the brand itself (remember it is an experience) may be said to evolve through the iterative process of listening, analysing, and responding to the data which represents all of these experiences as they are captured in cyberspace. Therefore a “digital brand” may be defined as

an emergent outcome of the ability to capture, analyse and proactively engage in contextually relevant communications and conversations with all stakeholders throughout the value network.

It is a manifestation at any point in time of the activities and actions (including communications) of all actors within the networked ecosystem who represent or engage with the entity as part of its day to day operations within the marketspace. It is the DNA captured and represented in digital form.

So, what are the implications?

Last week I participated in the joint Fuji Xerox Australia‘s “ne[x]twork” event as a panelist in Adelaide. (As an aside not only were we discussion the “Office of the Future” but we were launching the Adelaide Chapter of the IMM.)

The luncheon was facilitated by a guest speaker, Mike Walsh, who gave a great presentation on how digital technologies are impacting on people’s lives, and, in particular what the emerging generation are now expecting of the workplace. This generation don’t really remember life before the internet and mobile phones, are socially conscious and articulate in expressing what they want, and seem quite happy to share their opinions and publish their lives online.

In much of this they are creating their own digital brands, but they are not necessarily as aware as they might be of how a person they met once at a party and ‘friended’ to get the photographs might cost them a job (this happened to a friend of my nephew). Or how a photograph taken of them sipping a drink might impact on future insurance premiums. They are beginning to learn these things, often paying a price in the process.

The other thing that is happening is that the intrusion of digital technologies means that anonymity is something that is increasingly hard to achieve. You can manage your profiles and monitor your accounts but what happens when smart technologies such as face recognition, “tags” you largely without you even knowing it.  (Some latest research worth reading – facial recognition is terrifying  and work by Heinz Carnegie Mellon).

And to make matters worse with Facebook you not only have to log-out to prevent all of your data being potentially analysed you have to delete all cookies and even use a separate browser.

For some this is potentially a real problem, for example a friend of mine is a senior Judge in the Netherlands and cannot have his face all over Facebook for security and safety reasons. In addition the proliferation of digital branding now means that both the Police and Security services are having a hard time finding recruits who are able to go under-cover. It’s not just the CCTV that records everyday lives, it is the digital cameras and smart phones that can upload images of everyday situations almost immediately without any editorial control or required permissions.

So, what do you need to do?

The first thing is to be aware of the need to continually and proactively manage your digital brand.

That might be a conscious choice to disengage with or disregard social media, which is increasingly hard to do – all too often I find my photo online tagged by my nieces and nephews at family functions. It could be a conscious choice to proactively learn about what it actually means and to work towards at least some basic monitoring. Or, it could be an active campaign to utilise the opportunity within the appropriate contexts and make it work for you.

Regardless, there are some fundamental drivers to consider.

At the outset a “digital brand” is not something that an entity “has”, it is something that an entity will become, either intentionally or accidentally. In deciding to proactively manage a digital brand the entity must determine its purpose and then understand the alignment and integration of how it acts with that purpose, in other words it must determine how authentic (i.e. walk the talk) it wants to be. Within the digitally transparent world whatever doesn’t line up is potentially visible for all to see, and won’t be covered up by advertising or sponsorship campaigns.

Secondly, a “digital brand” is itself “digital” and it manifests through the data that is both published and received from its ecosystem – it is multidirectional, real-time and ubiquitous. It emanates from the iterative process of sensing and responding, and like a mechanical governor, of altering course depending on how the tides are turning. The choice of direction must be determined by the first question, that of purpose, and from this comes the challenge of knowing what to do and how to react as the data gives continuous feedback. One of the challenges is that people often don’t have sufficient time to think and reflect about what is going on, and all too often decisions may be made on the spot which, if left to mature a bit more, might be less costly and far wiser.

Thirdly, a “digital brand” can give an entity information about its sustainability in both the short and longer term. If an entity knows its purpose, but is also sensitive to changes within the environment around it, then it can become more resilient and more able to future proof itself, the guts of evolutionary theory. This is precisely what our current ARC research is about because it points towards the ability to read the lead indicators which emerge from engagement surveys, employee language, political currencies and cultural values which can impact on an organisation’s viabilty, rather than just read the lag indicators in the financial accounts. Taken together this information should provide leadership teams with a more holistic and robust set of indicators that can lead to more informed strategy and, one would hope, better decision making.

The model below illustrates how this all fits together. 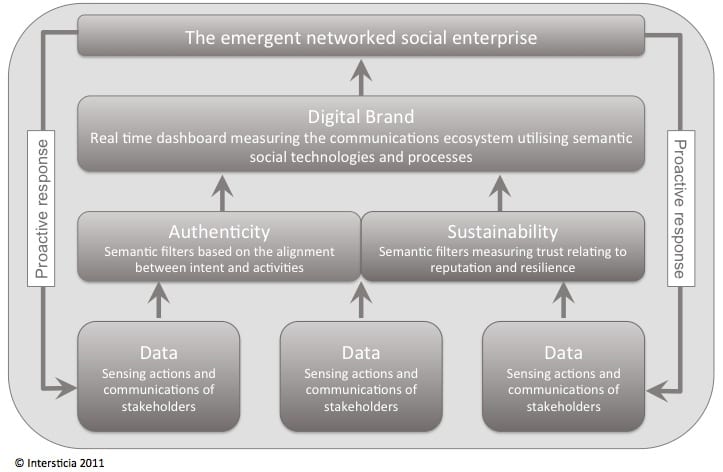 What we are now witnessing with the maturing of digital technologies is the evolution towards the “intelligent web” which brings together of the social media and the networked enterprise underpinned by the ability to utilise truly smart software. The challenge is to work with and include our humanity so that we can constructively leverage “the technium“, as Kevin Kelly calls it, and not be fearful or ignorant of it.

For that we need to explore the impact the digital brand is having on human behaviours, particularly in groups, teams and systems, the theme of my next post.