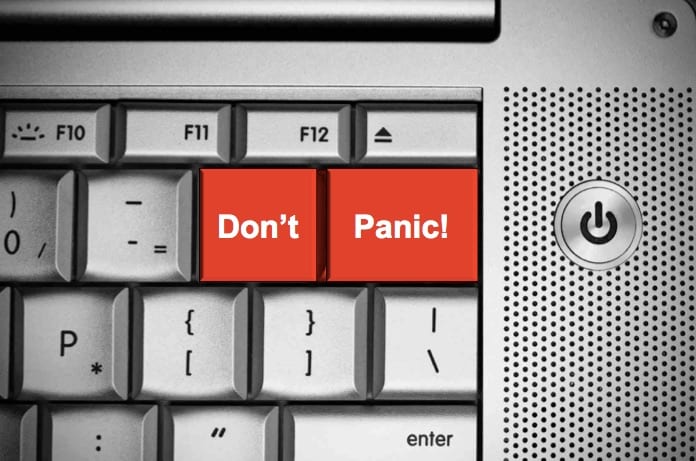 Douglas Adams gave this wise counsel to Hitchhikers as they travelled around the Galaxy, and I would give the same advice to all those who are waking up to the need for “digital skills” in the modern economy and wondering what to do about it.

Over the last few weeks I have attended a number of events relating to “digital transformation” and “digital skills” including:

In addition recent reports on digital transformation (see Sloan Management Review, Harvard Business Review, Forbes, McKinsey and The Mandarin) demonstrate that this is THE hot topic at the minute.

All of this makes me think that there is a mild panic setting in when it comes to digital, and that the feeding frenzy (which inevitably leads to a scramble for solutions and often turns out to be ineffective and short term) is moving up towards Gartner’s peak before the trough of disillusionment.

We (as the human societies) have been here many times before when it comes to technological change radically transforming human society and lifestyle.  The difference this time is the speed of the change, and our cognitive, psychological and social abilities to understand, predict and hopefully, manage the fallout.  But we have only just begun.

Some believe that humans actually have far less influence over the direction of technological change than we would like to give ourselves credit for, and that there is a technological determinism in everything.  I’m not going to discuss that here, but what I will say is that the current hype emerging around “digital transformation” is not particularly productive.  Hopefully very soon the hype around big data will be over and it will all just be “data”.

But the challenge remains – how do we empower and enable people to navigate, negotiate and thrive in the digital world?

Both Sloan and Harvard say it’s about strategy and people, not technology, and many of us have been saying this for a very long time … sigh!  But the rubber is hitting the road now and the lack of digital skills is beginning to bite.

People are beginning to wake up to the fact that digitally connected smart machines (intelligent devices using machine to machine technologies) are already disrupting traditional work practices.  A number of very good websites give some inkling of what may be to come (have a look at the work of Ross Dawson and NPR’s overview of jobs).  It is also instructive to think of episodes in recent memory where older industries have steadfastly refused to see the coming change and their workforces have them become largely unemployable because they lacked the skills and aptitudes for new industries (think of the UK Mining Industries in the 1980’s).

Secondly, as organisations seek to harness and exploit the power of digital interaction technologies (and the data they generate, all of which comprise the Social Machine) they are realising that the crucial element is getting people to use them, but use them wisely.  This is just as relevant at home as it is at work as parents begin to worry about the anti-social behaviours their children are developing.

The internet has become the nervous system of the 21st century … It is woven into the fabric of government service delivery, of war-fighting systems, of activist groups, of major corporations and teenagers’ social groups and the commerce of street-market hawkers.

Many years ago when I worked with both GAMAA and Fuji Xerox Australia we investigated precisely these types of challenges that the graphic arts industries were facing as digital disrupted everything about their businesses – their products, their business models, their customers, the value chains, their very existence.  Printers and technicians struggled to embrace digital technologies because they didn’t think digitally.  They worked with their hands, they could touch and feel the technologies they worked with and doing everything by computer required a whole new mindset (Shoshana Zuboff studies this beautifully in The Age of the Smart Machine).  We found it very difficult to get people to understand what was on the horizon, and I have now learned that people find it almost impossible to imagine things without actually experiencing them, and this has absolutely been the case for digital.  Once people could hold a smartphone in their hands and talk to Siri they began to get it.

In the work that I’ve done with ANZSOG I’ve learnt that learning comes through doing, not being told or shown.  As Damian Kimmelman (by far the most impressive speaker at Nesta’s Analytic UK event) said

Data is about solving real world business problems, it is learning through doing. … Data is not the “new oil” … we need a pragmatic approach to data and skills.

Any “transformation” will only come about by allowing people to experiment with solving practical challenges through playing with new digital solutions, within an environment where there is a tolerance for, and even encouragement of, risk.

Nesta presented the following skills matrix describing the person/s who possessed the combination of skillsets that businesses require.  They said that this was about as common as a Unicorn, and they are right – not only do each of these areas require different mindsets, different languages and different temperaments, they require different approaches to learning and different systems in how the individuals themselves present themselves to the world. 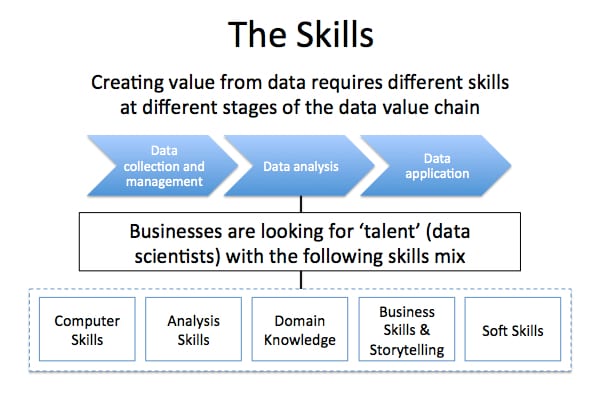 Businesses have been mining and analysing data for decades to gain customer insights and competitive advantage; over the past decade Governments have been trying to become more “open” and “transparent”, talking about putting citizens first (in reality often driven by austerity and productivity rather than renegotiating the social contract but that’s a whole other conversation); and the Non-for-Profit sector is beginning to realise the value of data as a currency.

Each sector has different reasons for wanting to more effectively work with data in digital form, and each has a different relationship with that data.

In each and every instance, and underpinning every digital interaction is Trust.  That basic belief in the reliability, truth, or ability of someone or something.

And this is the one core thing that people are beginning to wake up to.

Edelman, in it’s latest Trust Barometer, finds that overall trust in technologies and media is on the decline.  What is particularly interesting is that trust in innovation is low and in order to address this organisations need to build both integrity and engagement with markets (i.e. stakeholders).   This is something that the architects of the Web understood from the very beginning (see the Semantic Web Stack).

Trust is based on a number of things, but there are two areas which I think are worth immediate attention in order to achieve any sort of digital transformation – leadership and risk.

The most impressive presentation I heard at any of the events I attended was that given by Farooq Ansari talking about SafetyNets at the NPC Workshop.

SafetyNets is, very simply, a mobile application that utilises the power of community to support and protect sex workers in parts of the UK.  It has been co-created by Reason Digital and National Ugly Mugs, with support from the Nominet Trust.

SafetyNets is a classic example of the combination of leadership and risk, not the App or the technology, but in the data and how it is used.  A core element is the security that is built into the collaboration with clients/users, and the Trust that each will stand by what they have promised to deliver.  There will be times when this trust is tested, times when tempers are frayed, and times when a calm, considered approach is going to be needed rather than entering into “panic” mode.  This takes leadership and an innate understanding of the power of digital for both good and evil.

Senior managers within all organisations, regardless of their training and temperament, spend most of their time running between meetings, adjudicating funding debates, dealing with staff, managing boards and basically, “flying a desk” as my father used to say.  They deal in the soft skills, the really difficult stuff that neither machine nor artificial intelligence can even remotely begin to cope with as yet.  It is these skills which we will all need as the machines take over more and more of the tasks around us, but these don’t come quickly, nor can they be learned remotely – they must be learnt through patience, tolerance and experience.

Everyone learns differently.  The thing that concerns me about the “digital transformation” hype is that there is still way too much focus on the technical agenda, on “data science“, and the need for more technical analysts.  This is not the answer (although I readily accept that these are crucial skills within the broader landscape).

What we need to do is to teach everyone – regardless of the role that they perform – about learning – to learn now to learn (see both here and here) – and to become digitally savvy.

Which brings us to leadership.

One of my favourite leadership quotes is

A leader is one who takes the hardship of finding a better way of doing things for the common good and then selflessly shares the knowledge with others by guiding them on that path.  (Avijit Dutta)

In a recent article Peter Senge, Hal Hamilton, & John Kania talk about the need for system leadership which relies on three core capabilities:

This is what SafetyNet and the team behind it have done.  They have taken a risk and demonstrated true leadership.  They will stumble and fall, they will pick themselves up and keep going, and they will share their learnings as Farooq has so generously begun to do.

What we need is more leaders who are willing to learn and then to share, to speak about their mistakes and both encourage and proactively manage play and the taking of risks.  And leaders who are prepared to imagine and then create things differently.

Of all the efforts in digital transformation this is what will achieve the most success.

@Optus Where are your priorities? Obviously in the wrong places
Philanthropy in the quantified age