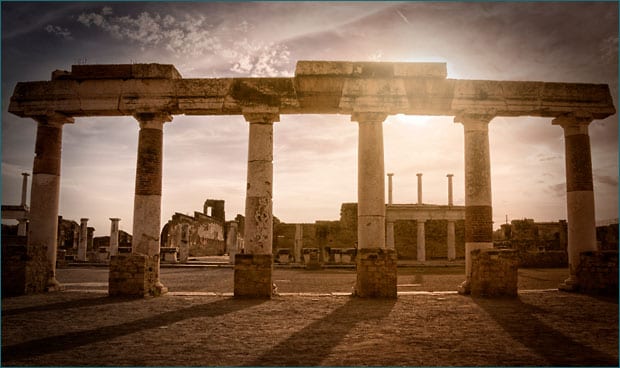 “Myths are clues to the spiritual potentialities of the human life.”  (Joseph Campbell)

Yesterday I attended my first lecture in the “For God’s Sake II:  Living Myths” series at the Art Gallery of NSW, part of my move towards reconnecting with my love for, and interest in, arts and culture, and to integrate this thinking into my current work.

The lectures are being given by Dr Julian Doogan, an interesting character who is an anthropologist turned “Professor of Religious Studies” at Macquarie University. He also lectures in counter terrorism, a key focus area in both academic and policy over the past decade.

Doogan, an engaging, measured and very polished presenter, addressed a pretty much packed auditorium of people aged anywhere between 20-80 who sat in rapt silence as he outlined the course and the ideas he was going to explore. From the outset he set about opening up the minds of the audience to recognise that so much of our current thinking rests on deep-set pre-historic patterns. He led us through a guided journey towards more fully understanding the power of myth in our everyday lives and, as he related the tales of Mithras and Gilgamesh, he also wove in Jung’s basic theory of archetypes, showing how the core stereotypes of the Animus, Anima, Shadow and Trickster are as relevant today as they have always been.

Doogan suggested that myths were often explained as being “mis-represented history”, “naive science”, or the need to make sense of things that terrify us. He, however, disagrees that any of these in isolation, because he feels that myths are expressing something that is part of the essence of humanity, and of being human.

As I sat and listened to Doogan I pondered upon the link between ancient myths and legends, and the stories that our current generation are telling through our own everyday commentary, so much of which is now captured in often excruciating detail via digital media. For archaeologists the evidence is “what people leave behind”, and in previous generations this has been through either physical artefacts or oral history – for us it will be in much of the digital data (if those coming after us are able to access and actually “read” it).

So much about archetypes is what we have been socialised over the millennia to intuitively recognise.  The roles that these powerful stories play in how we represent ourselves, and how others see us, have been explored by people like Jung in psychology, and for groups and organisations, by people such as Danny Miller and Lucy Suchman.  It is also what is now being captured by the data we create as part of our digital footprint, which people such as Genevieve Bell are exploring, all of whom I have referred to in a previous post.

So, as we continue to create our own archaeological record, which will inform the myths and legends that come after us, how are we to manage what we leave behind?

Jon Miller, in a recent article about online identity and reputation, suggests that:

“There are two fundamental, related cultural problems with the Web …  identity and reputation.  Reputation is the main problem, but you can’t approach it without fixing identity.  A reputation doesn’t refer to anything without a consistent identity behind it.”

Bertrand Duperrin suggests that reputation is “a raw material that will be used to build new models for HR, collaboration etc”, it is a part of the data that others will use to construct their own perceptions of how they see the world and the people, organisations and other constructs that surround them.

Identity is what we, as individuals and organisations, must proactively manage and seek to ensure is represented as authentically as possible, ourselves. It is our “brand”.

Jon Miller speculates that a tool such as hypothes.is (“a distributed, open-source platform for the collaborative evaluation of information”) may be able to bring together “the combined wisdom of the most informed people … as weighed over time by our peers, objectively, statistically and transparently.” In other words to authentically present information which can be trusted and verified, and relied upon with confidence, which is of course, the promise of the Semantic Web, and it is interesting that Google is now embracing semantic search.

In bringing together reputation and identity whilst those who create the technologies will seek to more effectively control how information is presented and analysed,  it is up to us as individuals to take more responsibility for what we do, and how we “publish” that to the world.

I was delighted to read that according to recent research by PEW Internet it seems that people are beginning to do precisely that, and to become more “privacy savvy”.  They seem to be taking a more proactive interest in their privacy settings, with whom they “friend” (and “un-friend”, now that this noun is a verb), and to how their online identities appear. In other words they are beginning to recognise the value of their digital brand, and the impact that it can have on how others perceive them.

It seems that some of us may be beginning to mature in the digital space, and to question the actions that we take and how we utilise these powerful technologies, but also how we as individuals need to control and take ownership of them.

If we more fully understand the power of myths and the importance of archetypes, combined with how we present ourselves, then surely we can ensure that the perception of our brand, in this life and the next, is perhaps a little more balanced. I would hope that we can write our own biographies but in a way that does represent that “spiritual potentiality”, rather than just misrepresented history or naive science.

The power to bring together all of human knowledge at this time is unprecedented and exciting, and to integrate these multiple perspectives to solve human problems and those of our planet, is surely something we should embrace and exploit.

If we can do this then perhaps the stories of our generation may be ones of hope rather than despair, and we can live up to our potential.