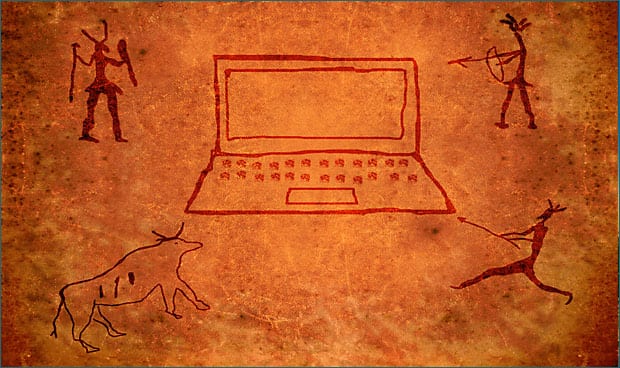 At the recent 2013 Web Science conference one of the most worthwhile sessions was that on “How the Web will revolutionise society”. In particular, it was Nigel Shadbolt’s commentary about the inter-relationship between technology and society, and the implications for society when the availability of a commodity shifts from scarcity to abundance, that I found most thought provoking.

In the “information age” our challenge is of managing an over abundance of ubiquitous information which is becoming both pervasive and, in my opinion, at times intrusive. Over the past few decades, as computers have gradually been insinuated into virtually every facet of our everyday lives, there have been numerous discussions around “information anxiety”, managing the “structure of overwhelm”, and whether our evolving information systems are, in fact, “making us stupid”. The emergence of Google Glass and Apple’s impending iWatch are just two of the latest gadgets designed to further blur the interface between the physical and digital worlds and ensure that we are constantly “switched on”.

Shadbolt observed that  whilst information technologies have changed dramatically over the millennia the fundamentals of the human psyche have not. To demonstrate this he referred to the British Museum’s recent exhibition of “Ice Age Art:  arrival of the modern mind” which displays a variety of beautifully crafted pieces – paintings, carvings of humans and animals, jewellery, musical instruments and tools – made by our ancestors tens of thousands of years ago.

Humans have always utilised and represented information throughout history, and as a species we have sought to transmit that information from one generation to the next, via whatever medium is available. Stories and narratives were encapsulated in oral traditions often accompanied by physical artefacts, and, whilst we may not be able to literally translate the messages contained in these pieces, the meanings are clear and linked to the everyday fabric of human life – birth, life and death; theology, sense-making and culture.  The art critic and novelist John Berger stated that

“art, it would seem, is born like a foal that can walk straight away.”

I have always been fascinated by the interplay between the technology and culture, and have been frustrated by the Cartesian approach which has compartmentalised and disconnected what to me are totally inter-related disciplines and ways of viewing the world.

After having visited the “Ice Age Art” exhibition I went to see a new “off West End” musical, “The Universal Machine” at the New Diorama Theatre, written and directed by David Byrne. Byrne and PIT have created a touching work based on the life, work and death of Alan Turing, who, in many ways encapsulates the interplay between the arts and sciences, a socially awkward individual whose brilliance lay in the “craft” of mathematics and the philosophy of existence itself.

Turing is credited with being the founding father of modern computer science and artificial intelligence, and his “Universal Machine” provided a blueprint for a general purpose computer upon which modern information systems are built.

The one question that pervaded Turing’s life was very simply

This question is not just about machines, is it also about “us” as human beings, and his famous “Turing Test” set up a situation where, via a series of questions and answers, a human subject was unable to tell the difference between man and machine. IBM’s “Watson” is probably the most notable example, having outwitted humans in playing the TV show “Jeopardy” and now being applied to numerous other real world scenarios.

The concept of artificial intelligence has been a long explored theme in science fiction, from Mary Shelley’s Frankenstein to iRobot, and, as we move towards a future where the fate of humans and machines are becoming inextricably linked, the implications of information abundance need to be explored more urgently than ever before.

I have written previously about “social machines” and, as Shadbolt pointed out, these emerging systems are challenging our traditional concepts of things such as:

As our thoughts and actions are increasingly being captured by digital information systems Shadbolt believes that we are building a “Panopticon”, where all information is observable, but as potential “subjects” we are unaware of whether or not it is us that is being observed, and we go about our daily lives regardless. The recent terrorist attacks in both Boston and London demonstrate the need for greater surveillance, and better information management, but they also raise all sorts of questions about the notion of privacy and accountability in the “discourse space” and the challenges of managing information abundance.

As with all challenges of managing scarcity versus abundance the outcomes are unknown, but what “Ice Age” so clearly demonstrated is that we, as humans, have not changed all that much over the millennia, and we should never lose sight of this in our excitement about the bells and whistles which adorn the new toys we are discovering.