This week I went to CeBIT, “Australasia’s largest business technology exhibition“.  Apart form the fact that I had to schlep all the way out to Homebush, they didn’t have my registration correct, and the organisation was poor, I was seriously underwhelmed.

The last time I went to CeBIT was around five years ago and I vowed and declared I wouldn’t go again because I found that:  whilst the speaker line-up was quite impressive there was no depth or value in what was being said; there was no real “thought leadership; nor was there the ability to actually engage with the speakers who flew in and flew out eager to get to their next appointments.

This event was no different and, given it was years later, was much worse, which reflects something far more worrying.

Australia “should aim to become the world’s leading digital economy. This won’t happen if the government continues writing strategies on the importance of the digital economy, but it can happen if we lead by example.”

With our current skills and capabilities I am not sure we are capable of doing so.  Given our ability to lead when we want to (witness the Gov 2.0 Task Force, and Turnbull’s own well-acknowledged and demonstrated understanding of the digital world) this is very sad.

For me neither of the major Commonwealth “government” speeches at CeBIT, either by Turnbull or David Hazlehurst, Acting Chief Executive Officer, Interim Digital Transformation Office (iDTO), were “inspiring” in any way, and a number of people I spoke to felt the same.  There were a lot of platitudes and “gunna’s” (as in going to’s) which was in stark contrast to other speakers such as Guy Kawasaki who spoke about “funding your passion” and “doing”, not just talking or writing lots of strategies and proposals.

I left CeBIT wondering if Australia, within which government accounts for a third of the economy, is going to “governmentalize” the digital agenda, and run it with the over-regulation and bureaucratisation that inhibits so much innovation in so many other areas:  rules and processes, rather than risk and experiment; and a dumbing down of the challenges that the digital “revolution” presents.

Turnbull quite rightly said that Australia’s performance in innovation is slipping behind that of other countries.

In the recently published “Digital Evolution Index” Australia is now classified as a “Stall Out” nation, and a number of the countries that led in the early days of the “digital revolution” are also now in the “stall” zone. 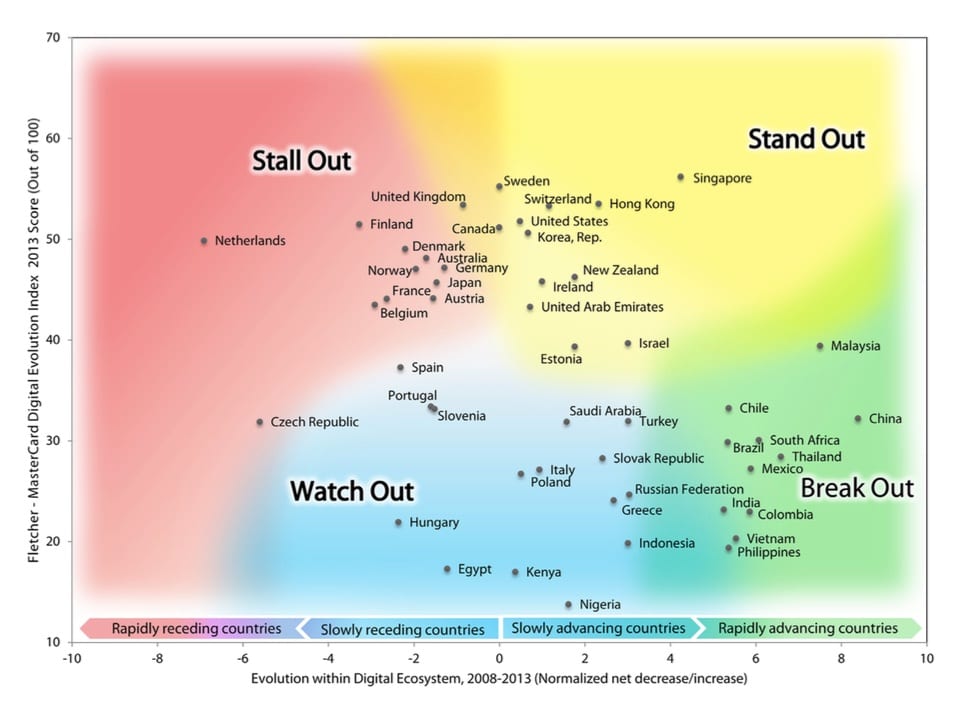 A part of explaining this could well be what I have heard from numerous public sector managers both here and in the UK (including those who watched the innovative “alpha.gov.uk” experiment evolve to become the “Government Digital Service“) that once the low hanging fruit of opening up data, systems and process is done, it is really really hard to effect change for the average citizen.  This only happens slowly and with a great deal of risk taking, new thinking and agility.

It also requires selling the message through a shared vision – Marketing 101 – and with it inspiring people to step up and do things differently, embrace the change, but most of all recognise that things will be different, and that requires both a different approach as well as a different mindset.

“Governments must renew their commitments to investing in the education of domestic talent and attracting highly skilled immigrants who can take advantage of the high quality ecosystems to restart the innovation engines.”

If Malcolm Turnbull wants Australia to be a global leader this is the first area he should prioritise, and, as an aspiring leader in his own right, who purports to understand what is required, he needs to recognise that the last thing Australia needs is a bunch of bureaucrats who think that the answer is cutting and pasting what has happened overseas and passing it off as world leadership.  We need a “government digital” model developed from our own aspirations and challenges, informed by the experience of other countries, but more of those in the “Watch Out” and “Break Out” categories, and underpinned by a genuine education programme that determines to change both hearts and minds through explaining, enabling and empowering people to harness information in digital form – to give them a digital literacy.

If we had people who more fully understood the concept of the “Social Machine” in its entirety, they would innately understand this.

What we need is real leadership, as Rt Hon. Francis Maude has demonstrated, but taken to the next level, supported by a team of fresh blood who engender excitement and stimulate a real conversation about what sort of “digital nation” we want to become.

Where are the brave souls who can help us navigate this sometimes scary, but unavoidable and filled with potential, digital world?  Where are those who can coach government to more effectively work with business and industry by developing new tools which Government can trial and support, not which Government stands in the way of and regulates?

This is a time to embrace the challenges and opportunities of “being digital”, not to bureaucratise it into being a compliance exercise.

And as for CeBIT?  I personally found it an overview of very little that was “new” but that happened many years ago … tired and out of date.