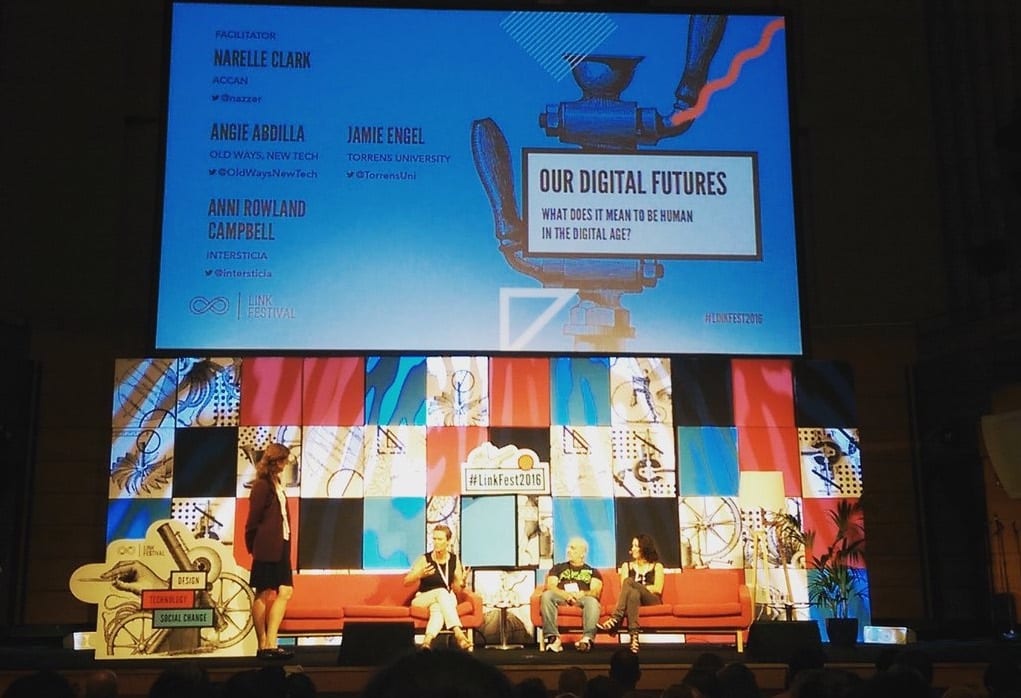 A few weeks ago I had the opportunity to participate in the 2016 Sydney Link Festival as part of a panel facilitated by Narelle Clarke, and with Jamie Engel and Angie Abdilla.

The topic we focused on was  “Our Digital Futures”, as in the future of humanity – nothing like a small challenge to cover in 30 minutes!

The most wonderful thing about this experience was getting to work with Angie and Jamie (Narelle I had met years ago when we did our Semantic Web research with Fuji Xerox).  On Narelle’s suggestion we all met for coffee a week or two before the event and there began a conversation which I realise happens all too rarely within “tech” circles, and certainly is not happening enough within society more broadly, especially in Australia.

In order to even begin to approach the topic of humanity and its future, we need to know who, and what, we humans are now, and how we got here.  One of the key drivers underpinning Web Science from the outset has been precisely that, to view society as a symbiotic Social Machine which integrates humans and technologies and seeks to more fully understand both the interactions and the interdependencies in terms of how both are evolving.  One aspect is viewing human behaviour through the lenses of psychology, anthropology, politics and other social sciences (see the Web Science Butterfly diagram).  The other, which is only just beginning to receive attention, is to view the tools and technologies we use from the perspective of both creator and consumer – who created the tools, what mental models guided them, and how is this influencing how we use them?

There has been a lot of talk about the lack of diversity within the tech industry, not only in the algorithms that run much of our lives, but in the very nature of the devices we use on an every day basis.  As I get older (and need things like glasses for reading!) I am continually astounded by the lack of common sense and awareness which informs the systems underpinning both devices and interfaces.  All too often a token female is introduced in to the mix, but all too often that female is white, well educated and well off.

What would the world look like now if indigenous peoples had designed the technologies we use?

Our world is awash with information … and we have commoditised its value by making it available at our fingertips.  But, information is not knowledge, nor is knowledge wisdom.  Wisdom takes both experience and maturity to attain, and wisdom begets wisdom.  Time and time again I see something new in a familiar environment, learn something new about myself, and am continually surprised by the wisdom and insights of others.

During the panel discussion one young student asked a very sensible question for someone under 30. With the availability of information online what is the value of experience?  I watched as furtive and knowing looks were exchanged around the room.  One thing about being human is that getting of wisdom that no amount of reading can teach.

According to Wikipedia, which we all know if the “font of all knowledge” (not!) …

Wisdom or sapience is the ability to think and act using knowledge, experience, understanding, common sense, and insight. Wisdom has been regarded as one of four cardinal virtues; and as a virtue, it is a habit or disposition to perform the action with the highest degree of adequacy under any given circumstance, and to avoid wrongdoing. This implies a possession of knowledge or the seeking of knowledge to apply to the given circumstance. This involves an understanding of people, objects, events, situations, and the willingness as well as the ability to apply perception, judgement, and action in keeping with the understanding of what is the optimal course of action. It often requires control of one’s emotional reactions (the “passions“) so that the universal principle of reason prevails to determine one’s action. In short, wisdom is a disposition to find the truth coupled with an optimum judgement as to what actions should be taken.

I actually like this definition because it is multi-faceted and dynamic.  It encapsulates the momentum of change, of the “permanent beta” which means that this type of wisdom is a continuous loop – it is iterative, it is contextual, and it changes as we change.

In a month where Google’s DeepMind has won a 4-1 match with the world Go Master Lee Sedol there has been a notable shift in the conversation around Man and Machine.  In her lecture Magical thinking:  fear, wonder & technology Genevieve Bell describes our bitter sweet relationship with the key technologies that are embedded in “artificial intelligence” and the mixed emotions that we, as humans, have towards them.  Science has, over the past half millennium, demystified magic and sought to explain the unexplainable.  As we create smarter and smarter machines we become increasingly desensitised to the power of magic, but so we also become ever more responsible for our impact upon the world around us.  In some ways this is leading to hubris and arrogance (to which I alluded in a previous post) and this is a dangerous thing.

The more I think about differing approaches to “intelligence” and all that this means the more I feel that there are two ways of looking at the way forward.

We can take the “”Western approach, which is evident in Europe and European-dominated cultures which is “we want to control nature” and it will bend to our will because we are the dominant species on the planet.

Or we can take a more “Indigenous” approach, which I see as being an acute understanding that nature controls us, we are merely one species among many, and we are part of something far greater and more powerful.

I think the former is a very dangerous path, and a lot of the writing around Transhumanism is in this vein.  This is not to say that human achievements aren’t impressive, nor that we should continue to strive to improve the human condition, but we must do so with acute sensitivity to our fellow species on this planet, awareness of how greedily we consume them, and alert to the fact that our behaviours are unsustainable.

What we need is a mix of Western ingenuity, energy and scientific rigour coupled with the wisdom and patience of Indigenous philosophy.  In this time of unparalleled speed of change we actually need to sit back and take a breath, to think and reflect, and be much more analogue in our thinking.

We need to live in human time as well as digital time, and to realise that perhaps we are rushing towards a future that we don’t have time to fully contemplate, let alone comprehend.  We are the first generation in human history to be able to study our actions and activities in almost real time, we are connected as never before and we are awash with information, but I’m not sure we’re awash with wisdom.