Yesterday I sat and observed an old man as he waited at a bus stop in London.  He stood with his trolley for almost twenty minutes, and watched expectantly, totally focused on his quarry.  The right bus just wouldn’t come.  Eventually some taxis drove around the corner and he tried to hail one, but none would stop.  A few minutes later the bus he had been waiting for arrived, and he slowly shuffled on board.

I kept thinking about how a younger person would approach the same task.

They would get out their mobile phone, they would look up the appropriate “app”, and, armed with almost “real-time” information, they would then know what choice to make in terms of travel options.  My children, who are currently traveling in Europe, are totally armed with rail timetables, addresses of the nearest Youth Hostel, and the cheapest eating places, all available immediately on their smartphones once they have WiFi.  When I travelled in my youth I, like the old man I observed, had to rely on Tourist Information Offices (often dodgy!), on other people, and if the bus didn’t come I just had to wait.  Life in the “analogue” world was all about anticipation and uncertainty … and as I think about it, this serendipity, and sometimes chaos, is what made everything so interesting!

This is in stark contrast to the world which Dave Eggers describes in “The Circle“, a dystopian commentary on the early internet age which describes a world where “Circlers” are constantly surrounded by the latest information relating to every aspect of their lives, and “The Circle” seeks to complete itself by linking action and information seamlessly – one all encompassing digital environment that brings the physical and digital worlds together so that humans can just get on with … well, feeding the machine!

As Mercer says to Mae

Did you ever think that perhaps our minds are delicately calibrated between the known and the unknown?  That our souls need the mysteries of night and the clarity of day?  You people are creating a world of ever-present daylight, and I think it will burn us all alive.  There will be no time to reflect, to sleep, to cool.

The emerging debate around privacy and the Faustian bargain that we are making with information driven companies for the sake of an easier life (yes! Facebook does know who you are regardless of whether you’ve given it permission or not) is one that is gaining momentum, but one that very few people are properly equipped to even enter into because they don’t have the basic “literacy” to know what they are talking about.

What do I mean by “literacy”?

According to Wikipedia (a great Circle artefact in itself!) “literacy” is much more than just the ability to read and write.  It also means “the ability to use language, numbers, images and other means to understand and use the dominant symbol systems of a culture”, in other words it is the ability to work with information.

That used to mean information in physical form; it now means information in all forms, both analogue and digital, but also other emerging information forms (such as biological codes) and the interaction that exists between them.  Before any debate, or even conversation, can occur around privacy and the many other issues that are arising as a result of the rapid developments in the digital information world what is required is a “digital literacy”, but even more, than that … we need to become “digitally savvy”.  We need to be able to live, work and capably navigate and negotiate within the digital information space in order to understand and appreciate the implications of what it means for everyday life.

As a way of answering these questions one framework to use is that of how to develop a “digital literacy“, a set of “functional skills” that would enable people to more effectively live, work and play in the digital world.  It is important to note here that whilst teaching people to code is a good start, as it provides an important insight into the language of digital information, this is only a very small part of what is required.  What people need are “digital life skills”, they need to become “digitally savvy”. 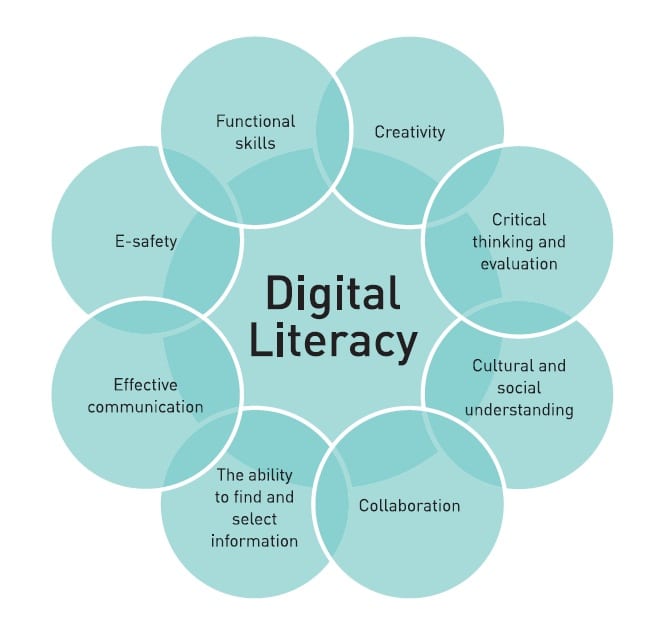 In a workshop I ran recently I tested these “functional skills” with a group of public sector managers who considered the needs of their  organisation, but also the needs of both “customers/constituents” and employees – the human elements of the social machine.  We came up with this table of challenges, many of which align with those any organisation faces within a changing environment.  What is heartening is that every one of these skills can be taught, as long as the individuals involved have a mindset to learn. 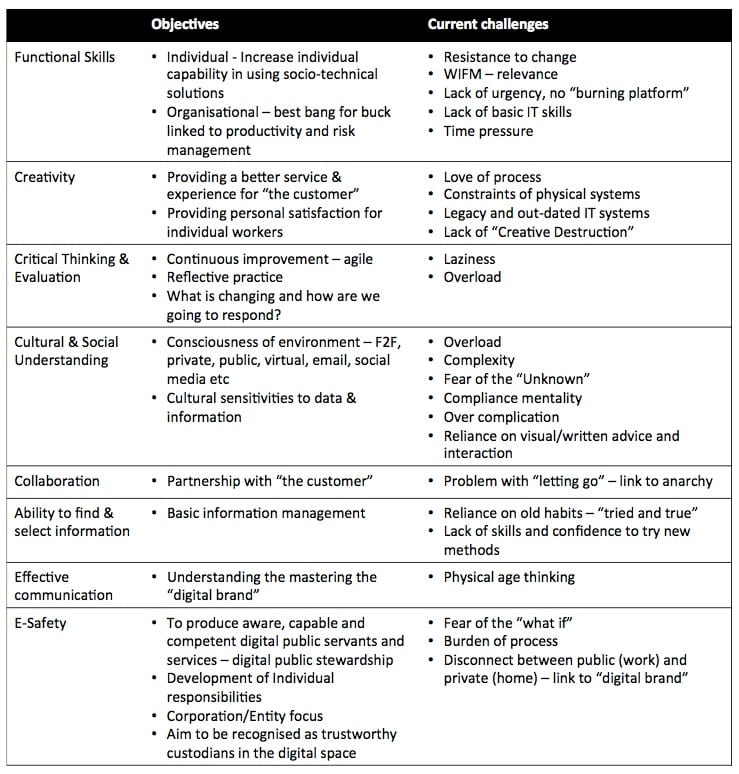 These challenges are what is driving our current ANZSOG Research project to create a “Government Web Observatory” with the Government of South Australia.  It is also one of a number of projects in this space that the Web Science Trust is currently investigating, and central to the work of the Digital Enlightenment Forum which is being held in Ireland in March.

Having a matrix of preferences presented as your essence, as the whole you?  Maybe that was it.  It was some kind of mirror, but it was incomplete, distorted.

The sad thing about “The Circle” as a story is that only a handful of people stopped to ask the really important question … the “what if …” and to demand that the machine be paused long enough for the humans to have time to fully consider and reflect upon what the ramifications might be.  Everything in the Circle runs to “machine time” and the humans are but cogs in the wheel (this is what the European Union is at least trying to do with initiatives such a the Right to Be Forgotten – to buy some time).

In the real world we are now beginning to grapple with some of the really big questions that are presented as a “fait accompli” in “The Circle”, but instead of being drowned in the flow of madness we actually do have the time to stop and reflect, to pause and consider, and to take the time to learn about the development of “artificial intelligence” and computational mathematics as they are applied to every day life.

We do have time to ask:

Every single one of us who wants to take an active part of this conversation, and those who don’t but who want at least to make sense of the rapidly changing world around them, because in many ways they are being drawn into it with, or without, their consent, need to develop “digital smarts” or “digital savvy”.  We need to do this because we have the chance to decide what sort of world we want to leave to future generations and because we have an obligation to at least make that choice.

During my time at Fuji Xerox I was privileged to witness first hand the legacy of the early researchers at PARC who foresaw much of what we now take for granted in the digital information world.  But these people were technical with scientific backgrounds.  The sorts of minds we will need for the future will be those which can bring the technology and social sides together, which Howard Gardner, in his “Five Minds for the Future” articulates as the following:

“Although there is no prospect of very intelligent machines in the near future, the dangers posed are very serious and the problems very difficult. It would be well if a large number of intelligent humans devote a lot of thought to these problems before they arise.

It is my feeling that the realization of artificial intelligence will be a sudden occurrence.  At a certain point in the development of the research we will have had no practical experience with machine intelligence of any serious level:  a month or so later, we will have a very intelligent machine and all the problems and dangers associated with our inexperience.”

What we need to understand is the dynamics of power in the information world and who is in control.

Once control of information is recognised as a source of power, then any powerful entity wants to control this information.  Governments and empires all want to control information.  What we’re seeing today is the very beginning of another switch, from power over things, to power over information, to power about the questions that shape the answers that give the information about things.  If you take the view that semantic information is broadly speaking delivered as a question plus an answer, then those who control the questions shape the answers.  That’s the new power we need to understand and manage properly today.

For this we all need to be “digitally savvy”.

The “anthro-pocene” era … redefining “humanity”
Moving towards a “digital enlightenment”